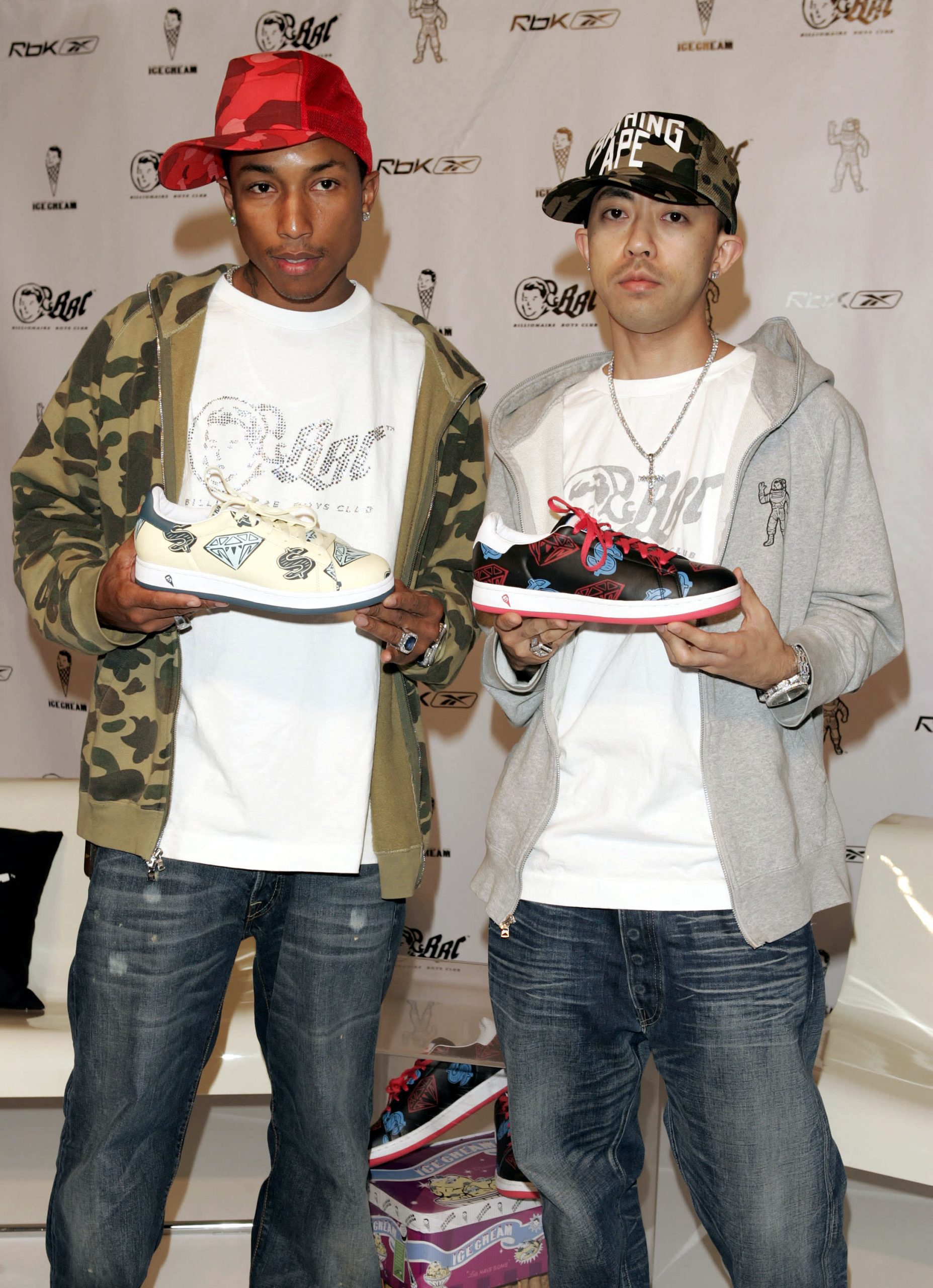 In the hip hop world, fashion trends are nearly as important as the music itself. For over four decades now, rappers, producers, dancers, and DJs have been shaping street fashion with bold, brave new styles. Each music video, concert appearance, and Instagram post is an opportunity to flex!

As hip hop culture saturates the mainstream, creators in the industry have found ways to monetize their knack for fashion in numerous ways. Endorsements, modeling deals, and social media influence are just as legitimate as record sales for today’s artists.

Some have taken a more entrepreneurial route in the fashion game, launching their own brands from scratch and bringing fresh looks to the public at (mostly) affordable prices. There have been dozens of flops, but today we’re looking at the Top 10 Hip Hop Fashion Lines of all time!

The early 2000s belonged to 50 Cent and his G-Unit crew, after “Get Rich or Die Trying” became a smash hit. As a business-minded man, it made sense that 50 would diversify his ventures after reaching the peak of the music industry so early in his career.

Teaming up with legendary fashion designer Marc Ecko in 2003, it became 50’s mission to be crowned king of the clothing business. He had already established G-Unit Records and was constantly recording, so collaborating with Ecko was the perfect way to enter the industry.

In addition, 50 Cent signed an exclusive deal with Reebok to manufacture a G-Unit shoe that same year. It didn’t take long for the brand to take off and produce millions of dollars in revenue.

While G-Unit clothing may not be as popular as it once was, 50 Cent has no shortage of other ventures to occupy his time and line his pockets with cash. From films, books, and video games to fragrances, beverages, and boxing promotions, 50 is truly one of the great hip hop moguls of all time.

No hip hop crew in history matches the massive impact and influence of the Wu-Tang Clan. With many members branching off and pursuing their own careers over the years, the Clan is nothing short of an empire. With tons of merchandising opportunities, a fashion line was an inevitability.

However, Wu Wear had a controversial first couple of chapters to its story. No original member of the group can be credited with its creation, but rather it was Oliver “Power” Grant who came up with the idea before “36 Chambers” even dropped.

Grant had been an associate of the group and tried multiple times to establish the brand early on. After the huge success of Wu-Tang’s first album, however, he was off to the races with gigantic sales and rapid expansion across New York City.

While some members of Wu have openly criticized the quality of Wu Wear, the money speaks for itself. The brand is still up and running in 2020, and will likely be around for many years to come.

Arguably the first true hip hop entrepreneur, Russell Simmons has the golden touch when it comes to making business magic. After founding Def Jam in 1984 with Rick Rubin, he got a taste of success and went right along to producing Hollywood movies and television shows.

Simmons jumped into the fashion game around 1992 when he founded the Phat Farm and Baby Phat labels. The brands were an instant hit, offering definitive hip hop style while maintaining a classic Polo vibe. Over time, Simmons added accessories, fragrances, and jewelry to the Phat Farm mix.

After selling the company in 2004 for a cool $140 million, Simmons stepped away from the fashion world and dove headfirst into philanthropic endeavors. Phat Farm clothing is still available online for purchase, however, if you want to relive the 90’s one more time!

Since Cam’ron and Jim Jones were childhood friends, they dreamed of hip-hop stardom. The Harlem scene exploded in the ’90s, and by 2002, Cam’ron had his own record label and produced the first Diplomats album. Its commercial and cultural success sent shockwaves through the industry.

Unfortunately, the Dipset heyday was cut short by internal disputes, and the group had virtually disbanded before the decade’s end. Still, Cam’ron flexed his entrepreneurial muscle by creating the Dipset USA clothing line and showing hardcore fans some love.

The Dipset brand is still fully functional in 2020, and new styles are coming out all the time. While the Diplomats may no longer be with us, the looks will live on.

Some rappers wait until later in their careers to consider a foray into fashion, but Sean Combs wasted no time in launching his own clothing line. Soon after the release of his first album in 1997, Combs (then known as Puff Daddy) designed and released his first collection of signature sportswear, Sean John.

Definitely one of the most profitable brands so far on this list of Top 10 Hip Hop Fashion Lines, Sean John rakes in over $525 Million a year. Critics love the clothes, too. Combs has also received multiple accolades from the Council of Fashion Designers of America (CFDA) over the years.

Among the many brands on this list, Tyler’s Golf Wang fashion line is the most precise reflection of the artist’s personality. Colorful, wacky, and at times completely over the top, the clothes are exactly what you’d expect from the Odd Future Icon turned Grammy-winning Solo Artist.

Featuring everything from hoodies and sweats to hats, shoes, and accessories, Golf Wang has expanded dramatically since it was launched back in 2011. While some of the clothes are loosely based on Tyler’s musical projects, other items are just born from the rapper’s wild imagination.

Now that streetwear has reached massive levels of mainstream popularity, we can only expect to see Tyler’s brand rise to the occasion with bigger sales and more recognition.

The OVO Sound label has played an instrumental role in Drake’s rapid rise over the past decade, but not many people recognize the success of the rapper’s clothing line, which he quietly launched back in 2011. October’s Very Own began as a low-key collab with Canada’s Roots Brand, then gradually built up momentum over the years until it could float as a lone profitable venture.

OVO Clothes inspire the effortless cool confidence of Drake himself, with earthy tones and subtle logos placed throughout the collection. The brand maintains the warm, rugged Canadian vibe of Roots while adding a dash of hip-hop flavor to the mix.

You can find OVO brick-and-mortar locations in New York, LA, and Chicago, but everyone else will have to shop online. Make sure to sign up for the newsletter, so you don’t get left empty-handed when a new collection drops. This stuff moves fast!

What industry has Hova NOT mastered at this point? It seems like the New York rapper has a hand in every possible area of business. Rocawear, which Shawn Carter founded in 1999, is just another example of Jay-Z, making it look easy. He had just one album under his belt, and he was already diversifying!

What made Rocawear stand out in a crowded late-90s fashion arena? It defined urban streetwear like nothing that came before. Big puffy jackets, loose baggy jeans, and super-comfy loungewear made you feel like you were living the luxury lifestyle no matter where you were at.

Rocawear was sold in 2007, and Jay-Z no longer has skin in the game, but it will always be remembered as one of his first big wins in the business world.

From under the mic to the production room and beyond, Pharrell Williams has an artistic touch that can’t be matched. He brought his creative abilities to the fashion scene all the way back in 2005, founding Billionaire Boys Club, originally a collaboration with A Bathing Ape.

While the brand struggled for position in its early years, it blew up as soon as Jay-Z became an investor in 2012. Sales nearly tripled the following year, and the BBC has been a streetwear staple ever since. The Ice Cream offshoot was introduced soon after, rounding out Pharrell’s line of clothes and accessories.

No rapper ever came close to the world of high fashion, but we aren’t talking about a NORMAL man here. Kanye is simply on a different planet when it comes to vision and executing a business plan.

He dabbled in various fashion projects in the 2000s, then changed the entire landscape with the release of Yeezy Season 1 in 2015. Ever since his Adidas collabs have been fought over and sought after by sneakerheads from every corner of the earth.

Yeezy’s have been a fan-favorite for years now, and are seen everywhere from NBA courts to New York Fashion weeks. Beyond any doubt, Kanye deserves to be #1 on our list of Top 10 Hip Hop Fashion Lines.

Who will be the next rapper to take a stab at the fashion business? Stay in the loop at RapTV for future articles just like this!