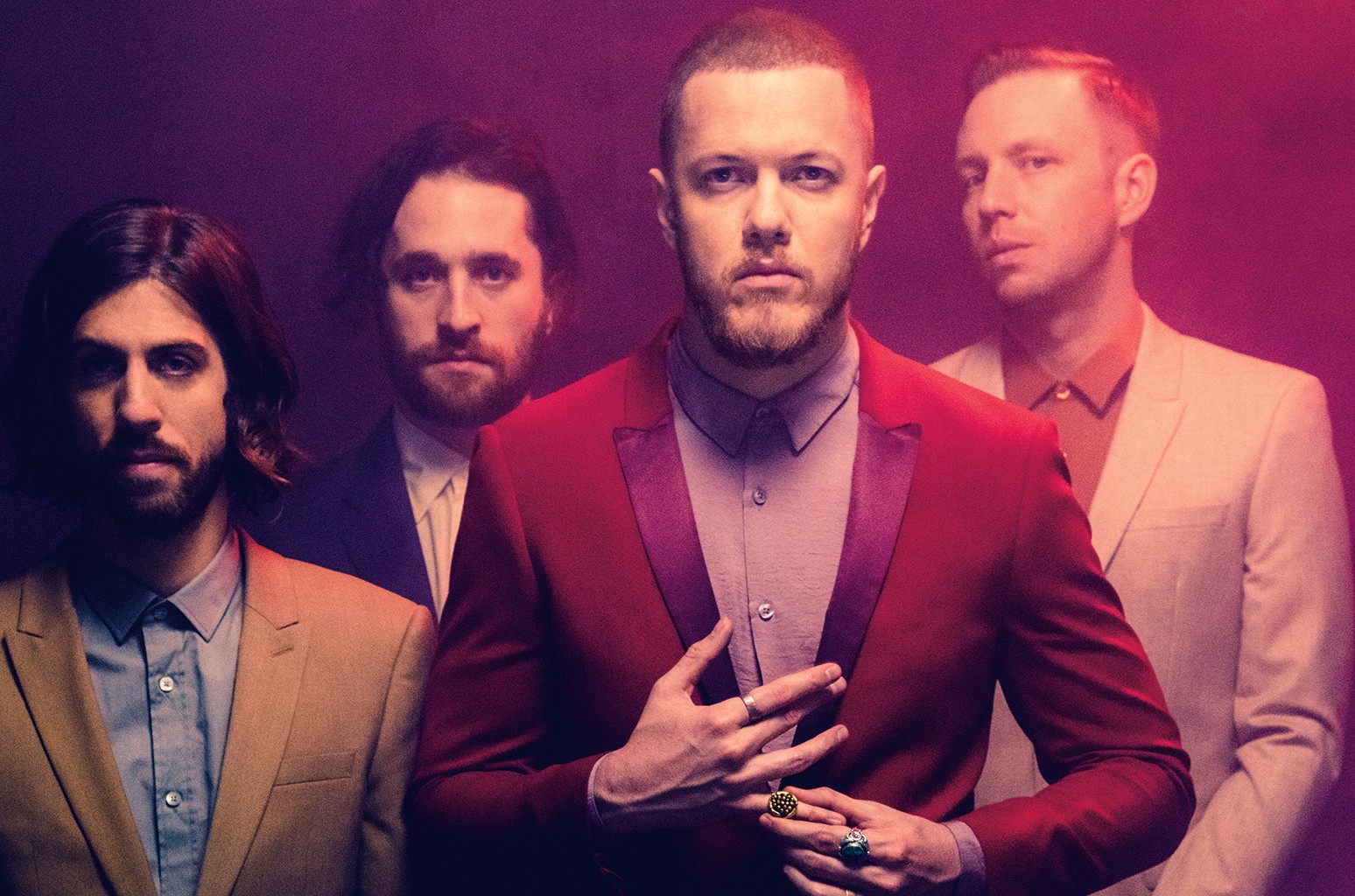 When it comes to musical genres, Imagine Dragons delve into a spread of electronic dance music and rap mixed up in a little hip-hop pop-rock package that seems poised to keep the addictive vibes coming, with a handful of hits including I Bet My Life and Sucker for Pain from Suicide Squad. Some of their albums include their second album Smoke + Mirrors, Continued Silence, Evolve, Origins, and Hell and Silence. Critics, on the other hand, have not always been so nice in many cases, to say the least, setting up two sides to stand on, either you believe Imagine Dragons are breathing fire of hot music or they are breathing fire full of hot air, including some record of the years.

The name alone – Imagine Dragons – is imaginative enough to create curiosity and keep you asking questions. What does it mean? How did this title that could fit just as easily as a children’s cartoon or a psychedelic movie from the 1960s come about? Apparently, it is an anagram of rearranged letters that only the band members themselves know what it stands for. That doesn’t prevent fans from taking their own stabs at it to solve the puzzle.

The “Anagram Theory” has produced guesses such as “Raiding Mangoes,” “Amigos in Danger,” and “Mage Dan Origins,” because the band’s singer’s name is Dan Reynolds. Imagine Dragons’ guitarist Wayne Sermon has done his best to prevent the real answer from being built up to mythical proportions that it could never actually be lived up to by saying:

Whatever the name Imagine Dragons name stands for, you don’t have to imagine what their career has been like anymore because we have the story ready and waiting for you. Their producer Alex da Kid and Interscope records have helped them get their career from a single best rock performance in a small venue to being the opening act at Bite of Las Vegas Festival in Nevada and having new songs and lead singles.

Imagine Dragons was formed in 2008 as a four-man band in Provo, Utah, prior to relocating to the flashier environment of ‘Sin City’ Las Vegas in 2009 with the desire to expand their audience. From these early ambitions, they totally thrived, becoming an internationally renowned hit factory, with their original alt-rock lineup from Utah changing. In fact, their singer Dan Reynolds is the only Imagined Dragon who lasted from the beginning.

Lemke left next, and this led to Sermon bringing bassist Ben McKee into the circle. The last member to join the current roster is drummer Daniel Platzman, replacing Andrew Tolman and Brittany Tolman in 2011. Brittany Tolman’s replacement specifically became Theresa Flaminio, who played keyboard on Imagine Dragons’ first album. But once she left too, the lineup finally remained static for a while.

How cool must it have been for Imagine Dragons to record their debut album Night Visions in such an unorthodox location as a casino? That’s exactly the way that the dice rolled for the band, recording those tunes on the third floor of the Palms in Las Vegas. Having already worked there on an EP, they knew the vibe would be right for a longer project.

This doesn’t mean that they were having jam sessions next to slot machines during business hours. Imagine Dragons were in the casino’s recording studio that guitarist Wayne Sermon referred to as “world-class,” and the space was soundproof. The lack of windows in the isolated room did a great job of keeping them locked into the moment without getting randomly sidetracked. Songs from this hit studio album you might recognize include radioactive. The album from this alternative rock band topped the billboard 200 charts at the number one spot and reached double platinum in the first week.

Percussion is integral to Imagine Dragons’ sound, which makes sense when you are in a group with two capable drummers – Daniel Platzman on drums and frontman Dan Reynolds. It has been said that this sound stemmed from necessity, because in the early phase of their career when they played parties in Vegas casinos, their music had to cut through the vast noise coming from slot machines.

Wayne Sermon, Daniel Platzman, and Ben McKee are all properly trained jazz musicians who met at Boston’s prestigious Berklee College of Music and have played in jazz ensembles previously. But Dan Reynolds, on the other hand, is decidedly not a jazzman.

For some strange reason, the Grammy-award winners Imagine Dragons seems to draw the ire of other musicians, such as Slipknot, The 1975, Foster the People, and Smashing Pumpkins, and Marilyn Manson, who have shared their disapproval of Imagine Dragons with the media.

The frontman of Imagine Dragons, Dan Reynolds, says he finds the criticism “extremely harsh,” and it has actually affected his mental health. Dan Reynolds tries not to dwell on it, mostly concerned that the blatant mockery from famous celebrities can lead to kids getting bullied for things like Imagine Dragons, or even his own kids one day taking the heat because of their father’s band.

Dan Reynolds suffers from ankylosing spondylitis, a rheumatism-like disease that can cause spinal joints to slowly merge together, which for him began as stiffness and hip pain in his early 20s. As it progressively got worse, he sought medical attention from doctors. After being misdiagnosed multiple times, the pain became debilitating, making the ability to play shows virtually impossible.

Dan Reynolds’ official diagnosis of ankylosing spondylitis came when he was 24. You would think that this unfortunate news would put him in complete misery, but he was, in fact, relieved that what he was experiencing has a reason, making it possible to fight back to regain health.

He’s been able to manage his condition, and with the help of exercising, dietary monitoring, and a treatment plan. He says that he averages about one or two flare-ups each year, and he does his part to raise awareness about the illness by partnering with a pharmaceutical company using online quizzes.

Depression has also been a thorn in Dan Reynolds’ side during his life. Even in his capacity as the lead singer, he hasn’t been afraid to speak out about his bouts of depression and mental health issues. The BBC reports that when the band was riding its first wave of popularity, Reynolds was coping with severe depression while trying to keep up with the crazy schedule of an incredibly famous entertainer.

During the years of 2016 and the early portion of 2017 alone, he completed a full world tour of 110 concerts on five of the planet’s seven continents. This was when it started to sink in that he was feeling numb that he needed to get assistance.

But Reynolds says depression has been staring him in the face since his school days, dealing with it the best he could, and avoiding medication because he worried that it would ruin the way he made music. Dan saw a therapist in 2016 and has since started treating his brain with a healthier diet, yoga, and meditation.

Imagine Dragons frontman Dan Reynolds paused in the middle of a song during a concert that the band played at Madison Square Garden in New York City to speak up about mental health:

Imagine Dragons have been very active when it comes to charities, raising money themselves or with other bands and brands, with involvement in at least five charities and four causes.

Imagine Dragons held down a headline spot at the Vegas Strong concert, which raised over $700,000 for the victims of the 2017 Las Vegas shooting, and a joint project with the Angry Birds brand for a cancer charity, including the fact that they have their own non-profit cancer foundation called Tyler Robinson Foundation, which helps cover basic living expenses for families that are struggling with childhood cancer.

Since none of the band members are named Tyler Robinson, why did that become the name of their non-profit cancer organization?

Tyler Robinson was a 16-year-old Imagine Dragons megafan who had the unfortunate situation of being diagnosed with a rare form of cancer and found his strength in the music of Imagine Dragons. In particular, the Imagine Dragons track “It’s Time” became his anthem for life.

Tyler attended one of their concerts in Utah. Dan Reynolds happened to spot Robinson in the crowd, singing in unison, prompting a connection with Tyler Robinson, who shared with the band his cancer condition, and they remained in contact not just after that show but after Tyler’s treatment process as well.

To make the story really dig even deeper into your heart, Tyler Robinson was actually declared cancer-free. But, his journey took a heartbreaking turn when he unexpectedly fell in a coma and passed away in 2013. Tyler Robinson was only 17 years old when he died – about a year after he had been diagnosed with cancer.

Tyler Robinson’s legacy lives on through Imagine Dragons’ Tyler Robinson Foundation, and He has also been immortalized in the band’s music catalog as well because the same cell phone video that Tyler’s his brother recorded at the concert where Robinson and the band first connected is included as part of in the music video for the song “Demons” by Imagine Dragons.

Imagine Dragons has a documentary named after one of their songs – “Believer,” dealing with the young LGBTQ people who are fans and also happen to be members of the Church of Jesus Christ of Latter-day Saints, or as some people label them – Mormons, a religion that doesn’t generally approve of the sexual orientations of people in the LGBTQ community.

The conflict explored in the documentary is Dan’s desire to help these people without alienating his church, and still dealing with drastic issues such as the alarming suicide rates among young LGBTQ Mormons. Believer received the Hollywood Documentary Award in 2018.

“One of my best friends was gay and Mormon, and I saw how conflicted he was. It was the first time my faith didn’t align with my mind and heart, and the first time I was being taught something at church that I was like, ‘Hey, this doesn’t seem right.”

Imagine Dragons’ singer Dan Reynolds happens to be a Mormon and one of the religion’s most prominent individuals. The documentary focuses on his efforts to organize his LoveLoud festival in Utah, where the Mormon fellowship is quite strong to promote support and acceptance of the members of the LGBTQ community with whatever it takes, including all profits going to charity.

Even though he identifies as a heterosexual male, Dan Reynolds is also a prominent LGBTQ activist, creating the LoveLoud Foundation in 2017 to support the LGBTQ community and help young people find acceptance within their own individual communities. The foundation has its own festival that managed to sell out its 17,000 tickets in its first year, with all profits directed towards LGBTQ charities. In 2018, alone, the festival raised $1 million for charity.

Developing their sound through changing their geography, having their membership feel like it is a revolving door with musicians whizzing in and out, and having way too many haters to ever feel comfortable is quite a unique set of circumstances to make music in.