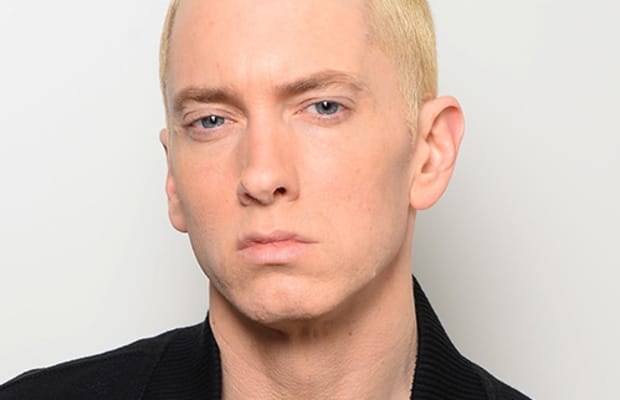 Marshall Bruce Mathers III, better known as Eminem, is an American rapper, producer, and actor who was known as one of the most controversial and best-selling artists of the early 21st century. Through his music, we get the sense he had a pretty troubled childhood. Read more for a look into his life.

Marshall “Eminem” Mathers was born on October 17, 1972, in St. Joseph, Missouri to parents Marshall Bruce Mathers and Debbie Rae Nelson. Eminem was basically born into a musical family as his parents were in a band called Daddy Warbucks. They usually performed in Ramada Inn’s located in and around the Midwest.

Once Eminem’s parents separated, he and his mom spent most of their time moving between Michigan and Missouri. There are several allegations of abuse by his mother and other family members the two of them stayed with during all the moves they made. Eminem’s dad ended up in California and it is rumored that when he sent his dad letters, they all came back stamped “return to sender”.

The abuse became worse when Eminem and his mom settled on 8 Mile in Detroit. Eminem was beaten by neighborhood kids and considered a loner. Oddly enough, Eminem was very interested in storytelling and wanted to write comic books.

At age 14, Eminem began rapping in clubs in Detroit, Michigan. Eminem repeated the 9th grade three times because of unexcused absences and ended up dropping out of school at age 17 determined to be a hip-hop artist. He began rapping under the name “M&M”, his initials and later, decided to spell out that acronym as Eminem.

Eminem became a part of the rap sextet D12 and released his first album titled “Infinite” in 1996. The “Infinite” album featured songs like, “Tonite”, “313”, “Never 2 Far”, and “Open Mic”. However, the album did poorly and never got much publicity.

In 1997, Eminem piqued the interest of Dr. Dre after he came in second place in the freestyle category at the 1997 Rap Olympics in Los Angeles. By this time, Eminem had invented “Slim Shady”, the alter ego that gave a voice to Eminem’s vulgar lyrics.

Dr. Dre began mentoring Eminem and in early 1999, he released “The Real Slim Shady”. Since music videos were still a thing in 1999 and with the credibility of Dr. Dre’s involvement, the album sold several million copies largely because of the hit song, “My Name Is”. Eminem won two Grammy Awards and four MTV Video Music Awards.

In the midst of Eminem becoming a rapper, he met and fell in love with Kim Scott. In 1988, Kim showed up at the house Eminem shared with his mom. His mom claimed she needed somewhere to stay so she gladly opened the door to give Kim a home. When Eminem’s mom realized the two year age difference between the two, she encouraged Kim not to get involved with her son. That talk did not work!

Eminem and Kim started and maintained an on-again, off-again relationship for eleven years until they were finally married in 1999. However, there were still hardships before they were married the first time. Once Eminem’s mom realized the two were in a relationship, she put them out of her house and they lived in poverty on the streets of Detroit. In December of 1995, Kim gave birth to their first child Hailie.

People were concerned about some of the music and lyrics Eminem wrote about killing Kim. He was also confronted at work a few times from coworkers stating their opinions about how morbid his music was. Even though these allegations were floating around, Kim still married Eminem on June 14, 1999.

In the summer of 2000, Eminem allegedly caught Kim kissing another man. He proceeded to beat him with an unloaded gun and received an assault charge. Eminem pled guilty and received two years’ probation. Even while on probation, Eminem was still allowed to put on concerts. During a concert in July 2000, Eminem performed the song “Kim”, another song about being violent to his wife. Kim was in the audience and witnessed Eminem hit a blow-up doll that was designed to look like her. Afterward, Kim tried to commit suicide. Once Kim recovered from the suicide attempt, Eminem filed for a divorce and Kim sued him. The couple still lived together for a time after everything was settled.

Although 1999-2000 were hard years for Eminem, he still kept his music career going. In 2000, he released the fastest-selling rap album in the United States titled “The Marshall Mathers LP”.

Again, Eminem’s album caused more controversy in the LGBT community with people stating that Eminem was a homophobic misogynist. To quiet the critics, Eminem performed with Elton John at the Grammy Awards in 2001. Coincidentally, the Marshall Mathers LP was nominated for the best album of the year.

Even with the controversy and his continuous disagreements with Kim, Eminem went on to record an album and tour with D12. The label “Shady Records” was also born in 2001.

In 2002, “The Eminem Show” was released and ended up being about as big a hit as “The Marshall Mathers LP”. The popular tracklist for this album is as follows:

This was also the same year Eminem debuted as an actor in the semi-autobiographical movie, “8 Mile”. Although Eminem has been adamant about the fact that the movie is not about his life, the film is in fact about a young man growing up on 8 Mile Road in Detroit who has ambitions of becoming a rapper and the struggles it takes to get there. Throughout the film, Eminem’s character Jimmy is seen writing lyrics on a sheet of notebook paper and on his hands. These lyrics later became the hit song “Lose Yourself”. The song was written specifically for the movie and a year later, Eminem won an Academy Award for it.

In 2004, Eminem released “Encore” and in 2005 “Curtain Call: The Hits”, a collection of previously released songs…much like an Eminen version of “Now That’s What I Call Music.”  Neither one of these albums did as well as his previous albums. For the next 5 years, Eminem sort of disappeared from the public eye. In 2006, he briefly reappeared to eulogize friend and D12 member Proof who was killed outside of a nightclub.

The only other thing we know about Eminem’s life during his hiatus is that at some point he and Kim remarried and in 2006, they decided it would no longer work and they divorced again.

Eminem graced the world with new material in 2009 with the release of “Relapse”. The album featured the following tracklist:

A year later, because critics will be critics, Eminem released the “clap back” album “Recovery” to prove he was still a force to be reckoned with. This tracklist includes:

This album produced major hits with “Not Afraid” and “Love The Way You Lie” featuring Rihanna. The collaboration was so great, Eminem teamed up with Rihanna again on “The Monster” which is part of “The Marshall Mathers LP 2” that was released in 2013. The album was Eminem’s sixth album to win a Grammy Award for the best rap album.

The criticism never stopped and neither did Eminem. He released “Revival” in 2017 and “Kamikazi” in 2018. In addition to working with rapper Royce da 5’9 under the name Bad Meets Evil, Eminem released his latest album “Music To Be Murdered By” on January 17, 2020. The album became Eminem’s tenth consecutive album to top the Billboard 200 chart.

The tracklist for “Music To Be Murdered By” features:

“Music To Be Murdered By” surprisingly (not really) drew more controversy because of the track “Unaccommodating”. Eminem “raps from the perspective of the suicide bomber who killed 22 people at Ariana Grande’s concert in Manchester, England.”

It caused such an uproar that the mayor of Manchester, Andy Burnham, gave a statement. It isn’t clear if Eminem reacted due to the statement or the kindness of his heart, but he did partner with the British Red Cross to raise more than $2 million for the victims of the incident.

These days, you can find Eminem doing surprise collaborations with other artists like Kid Cudi and Jessie Reyez.

Other collaborations of 2020 include:

Now, at age 47, Eminem is also having a great time raising his daughters. Hailie Jade, 24, graduated from Michigan State University in 2018 with a degree in Psychology and a 3.9 GPA. Eminem also helped raise his niece Alaina Marie Mathers and adopted daughter, Whitney Scott Mathers.

No matter that he has sold over 100 million albums worldwide or that he is one of the richest rappers in the world with a net worth of approximately $210 million, he says his greatest accomplishment is being able to raise kids.