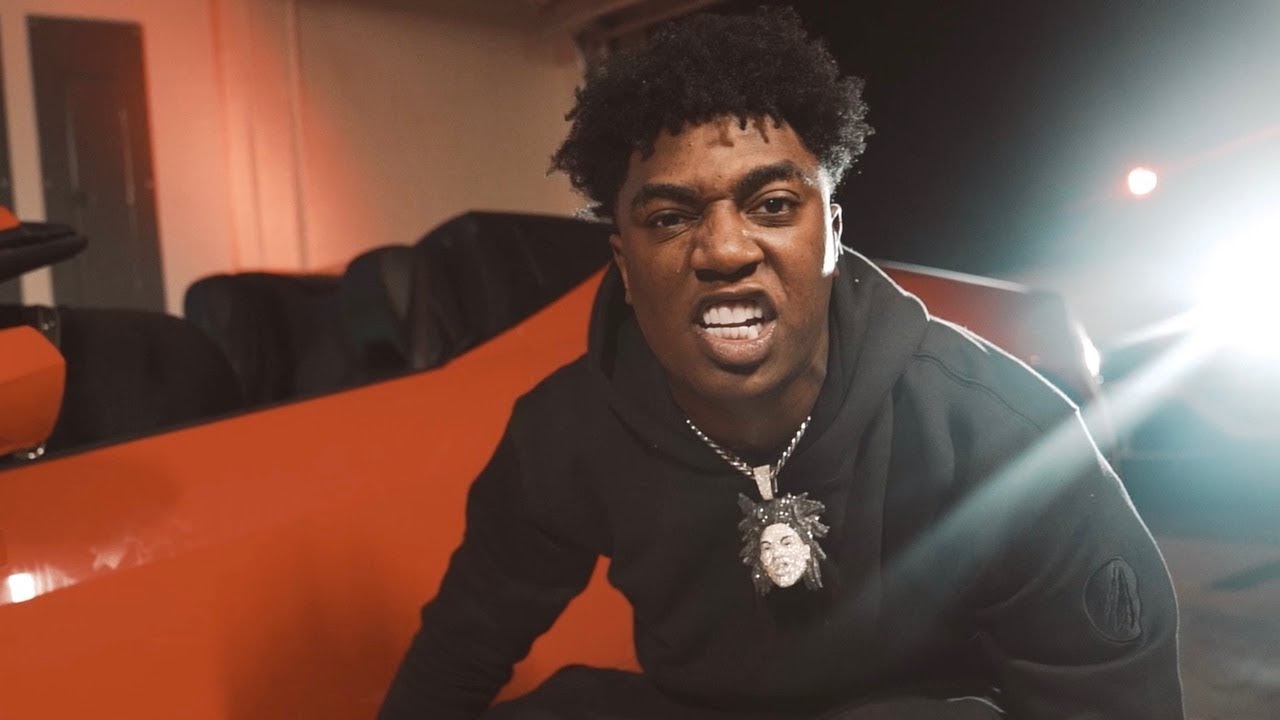 Fredo Bang is on pace to become one of the biggest stars out of Baton Rouge in history. A viral rapper, a street-certified gangster, and recently revealed to be the cousin of legendary BR artist Boosie, Fredo Bang has hopped onto the scene displaying an uncanny flair and a relentless pursuit of success. In less than three years, the 25-year old artist has dropped five projects, putting out over a hundred songs. He’s spent much of his adulthood so far behind bars, but is making up for lost time, putting out a constant stream of music.

His style of vocal delivery combines conventional aspects of trap music with loud, passionate singing and harmonizing. The content in his music reflects the tumultuous journey thus far in Fredo Bang’s life, speaking on issues like poverty, gun violence, death, and more. Despite Fredo Bang’s connection to the streets, he also has shown the ability to be vulnerable and dive deep into the pain he experiences.

Whatever the young artist chooses to talk about in his music, one thing is apparent: he speaks with conviction. Fredo Bang is the hottest artist to come out of Baton Rouge since NBA Youngboy. As Fredo Bang continues to build momentum with his audience and fine-tune his sound, the fans wait to see what the artist has in store for the future.

When He Was Young

Fredo Bang was born Fredrick Thomas Givens II on March 29th, 1996, in Baton Rouge, Louisiana. He was raised by his mother and step-father. As a kid, Fredo Bang says he would listen to music on his CD player and imagine that he was the artist performing the song. In middle school, he joined the band, playing the clarinet as his first instrument. Eventually, he transitioned to playing the french horn.

He continued to play music in the band throughout high school, performing in concerts and in marching bands. He credits his early days playing instruments as a contributor to his musical prowess today. After declining a scholarship he received from a college in Texas, Fredo Bang increasingly became involved with street life, leading to his first serious case in 2015. In an interview with HipHopDX in January of 2019, he said he was “a good kid” until 2014, when his best friend Krazy Trey was shot and killed.

Krazy Trey was a frequent collaborator with Fredo Bang in his early music. “When that happened, I felt like a piece of me went away too.” Fredo Bang was introduced to rap by one of his best friends growing up, who was later killed in a street-related incident.

Through Krazy Trey, Fredo Bang met fellow Baton Rouge rapper Gee Money, who was also a huge part of his life. At the time, Gee Money already had a bit of a buzz in Baton Rouge, and together, they released several songs, including “Rainy Days,” “I Love Pu$$y,” “Who Gon Ride for You,” and “Sweet Lady.” Fredo Bang’s name comes from the late Chicago rapper, Fredo Santana.

The Start Of A Career

At the beginning of Fredo Bang’s career, all of his songs were collaborations with other rappers. However, in February of 2016, he dropped his first solo track, “Thuggin’,” paired with a raunchy music video of Fredo Bang and his crew posted up, carrying weapons. The video has amassed over 3 million views on Youtube. What may have really propelled the song, though, was a real-life event that was attached to it. At the start of the video, a news story is shown of Fredo Bang getting arrested for a recent shooting.

The incident occurred in November of 2015, and he was charged with second-degree murder, as well as the illegal use of a weapon and aggravated criminal damage. Fredo Bang’s mugshot is used as the cover art for the song. Some people criticized Fredo Bang for using his legal case for publicity and glorifying crime. Allegedly, the shooting happened when Fredo Bang was at his home one day, and he got into an argument with the victim.

There was another person present as well, also a suspect in the case. The three men went to the victim’s house, where the argument escalated when the other suspect withdrew a gun and started shooting at the victim. In response, Fredo Bang retrieved a gun from his car and began shooting as well. A full-on shootout ensued. Fredo Bang and the other suspect hit an occupied vehicle before fleeing the scene. He was arrested two months later.

In the end, Fredo Bang accepted a plea deal and served out his sentence until May of 2018. While locked up, though, tragedy struck. In September of 2017, Gee Money was shot and killed in his own city. Two years later, an associate of NBA Youngboy would be arrested in connection with the crime.

Following Gee Money’s death, Fredo Bang made it a goal of his to keep his friend’s memory alive. In an interview with No Jumper, Fredo Bang starts off the podcast with a customary phrase he’s developed to pay respect to Gee Money. In the interview, he is wearing a chain of Gee Money’s face and even pulls out Gee Money’s ID, saying he carries it around everywhere with him. He says he thinks of him every day.

Despite the heartache he was subjected to in prison, Fredo Bang did see considerable strides in his music while locked up. Fortunately, his music had actually grown in popularity as he was incarcerated. Unable to enjoy the fruits of his success in prison, Fredo Bang started working on his next endeavor, his first mixtape. The project was called “2 Face Bang.” When he was finally released, Fredo Bang’s momentum as an artist was at an all-time high.

He recorded the lyrics he had written in prison and was able to release “2 Face Bang” by October. Ironically, Fredo Bang decided to include zero features, after spending much of his career thus far only rapping with other people. “2 Face Bang” quickly started to blow up online, with two tracks in particular, “Oouuh” and “Father,” going viral. The music video for “Oouhh” hit over five million views on Youtube, and the video for “Father” hit over 27 million views. The two songs gave fans a glimpse into Fredo Bang’s personal life and showcased his emotional depth as an artist.

In April of 2019, Fredo Bang would back up his recent success with another successful mixtape, “Big Ape,” with 19 tracks on it. The project had some of Fredo Bang’s first significant features in his career, including Sada Baby, Tee Grizzley, Moneybagg Yo, and more. The most popular songs on the tape were “Gangsta Talk” with NLE Choppa, “Big Sticks” with YNW Melly, and the “Oouuh Remix” with Kevin Gates. The tape helped Fredo Bang get the attention of Def Jam, which he inked a deal with that fall.

In November, he released his third mixtape, “Pain Made Me Numb,” releasing sixteen new tracks. It was the first project by Fredo Bang as a signed artist and had features from DJ Chose, DreamDoll, and Derez De’Shon. In comparison to “Big Ape,” this project didn’t have quite the impact online. The most notable songs from the project are “Mongoose (F*ck You)” and “Cap A Lot.” Not too long later, in April of 2020, Fredo Bang released his debut studio album, “Most Hated.”

Several songs performed very well from the project, including “Saucy,” “Trust Issues,” “Waitin ‘4,” and “Yo Slime.” Artists like Lil Baby, YNW Melly, Moneybagg Yo, Tee Grizzley, and others contributed to the project, and it also featured production from Hardbody and DJ Chose. It was originally scheduled for a March release but was delayed a few times due to the COVID-19 pandemic. Despite these release issues, the project would mark Fredo Bang’s first time on the Billboard “Top 200” chart, peaking at the number 110 spot. In classic Fredo Bang fashion, “Most Hated” delved into the many issues in his life, including heartbreak, trust issues, and grief.

His demeanor switches back and forth from violent and angry to depressed and contemplative. For instance, in track eight, “Traffic,” Fredo Bang literally talks about his love for killing, saying, “I take my chances in traffic. I ride with a ratchet. If niggas got some smoke on my ashes. I don’t really talk about action. When it’s time that I’m flashing. I be rappin’ bitch, but murder my passion.”

Just a song later, though, on “Let Me Tell You” featuring Kianna, Fredo Bang is speaking about a past romantic relationship saying, “I miss kissin’ on your cheek yeah. Holdin’ you until you’re sleep yeah. Your smile used to make my day. Don’t tell me that was just a phase. Forever mine, that’s what you said to me. I cherish you even the blind can see.”

These sporadic shifts in the mood of each song display a level of versatility with Fredo Bang that is absent in a lot of other artists. However, it remains genuine. From club bangers to soulful love songs, Fredo Bang is able to incorporate elements of his real life into his music. Fredo Bang kept up this consistent outpour of music in September with yet another project, “In The Name Of Gee.”

The 15-track mixtape serves as a break from Fredo Bang’s aggressive side, with a lot of singing and harmonizing on the project. The project is clearly dedicated to Gee Money, with his face on the cover art and several references to him throughout the album. Kevin Gates was featured again on the project, along with Mulatto and Seven7Hardaway.

Many fans speculated that this song was aimed at fellow Baton Rouge rapper NBA Youngboy, whose associate was involved in Gee Money’s death. In August of 2020, NBA Youngboy took to Instagram to threaten Fredo Bang, saying, “I’ma catch you and bang yo scary ass.” Months later, Fredo Bang spoke about his beef with the rapper, saying he “doesn’t understand” why he’s upset and that he’s open to working with him on music.

The song “Top” peaked at number 40 on the Billboard “Top 200” chart. The controversy behind the track undoubtedly helped it to grow in popularity.

The Future For Fredo

In January of 2021, Fredo Bang released the deluxe LP version of “In The Name Of Gee,” adding the label “(Still Most Hated)” to the album title. It was the artist’s first release of music for the new year. Ten new tracks were added. Several significant features were also added, such as Lil Durk, Moneybagg Yo, Sada Baby, Rylo Rodriguez, Kevin Gates, and most prominently, Gee Money himself on the penultimate track, “Yeah Yeah.” In February, Fredo Bang dropped visuals for the song “Soul Cry” off of “In The Name Of Gee (Still Most Hated).”

The song was the opening track of the project. In terms of the future, Fredo Bang is likely to drop his sophomore studio album in 2021. He is also up for contention for the 2021 XXL Freshmen Class. Fredo Bang is also still dealing with the repercussions of his case in 2016. In regards to his legal situation, Fredo Bang has served two years on his parole and has another three years to complete it. He is able to travel outside his state but must check in with his parole officer beforehand each time and receive a travel pass.

Fredo Bang Shares ‘In The Name Of Gee’ Mixtape | ELEVATOR