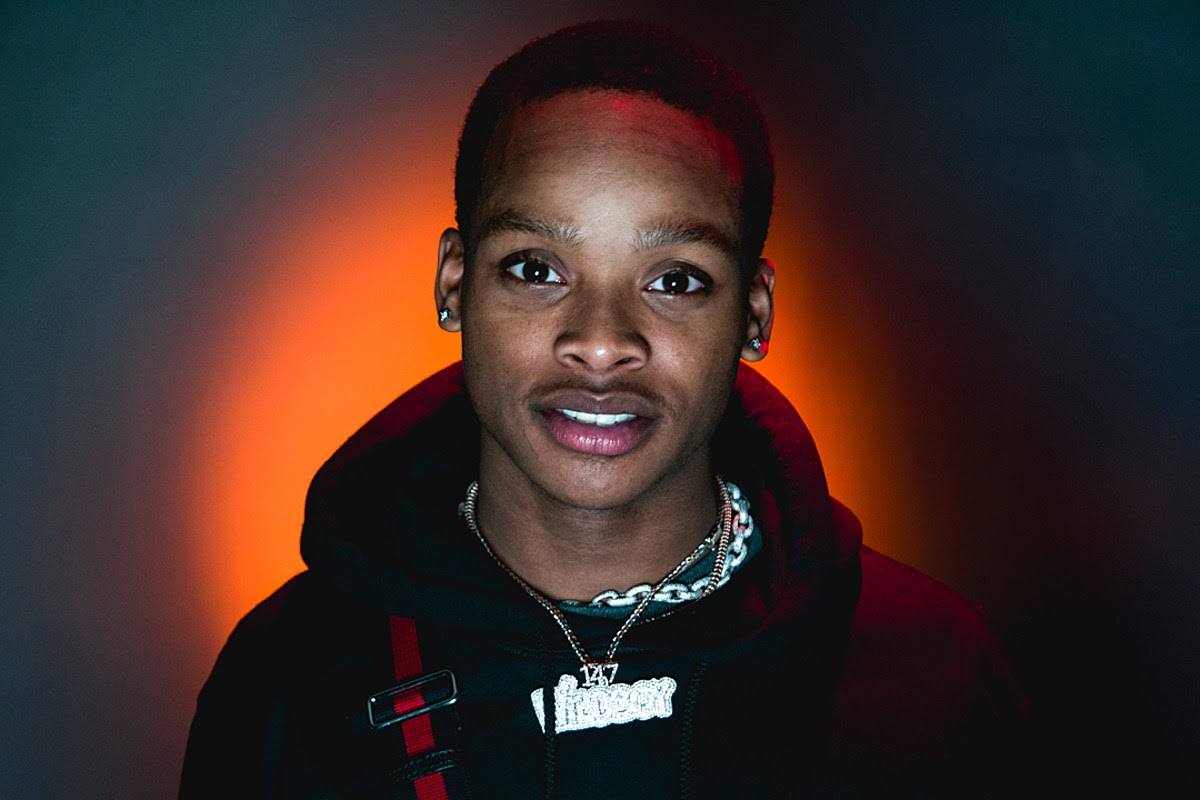 For the past decade in Chicago, drill music has been the dominant force in hip-hop circles. However, artists like Calboy have successfully diverged from the norm, fusing emotion and melody with the city’s traditional gangster rap energy. His music is distinguished by prominent themes of heartbreak and pain, contrasted by in-your-face, gritty, street content.

Calboy, formerly known as 147 Calboy, has been able to capture the attention of audiences worldwide, speaking about topics like love and relationships, issues that the average fan can relate to more than the murderous nature of drill.

Despite the occasional mention of Glocks and choppas, Calboy is largely uninvolved with much of the street politics in Chicago. He doesn’t claim any sets. He doesn’t throw up gang signs or hold guns in his music videos. In fact, he often speaks of the irreversible consequences of the streets, both in his music and his interviews. The 21-year old rapper is one of the newer faces out of Chicago, leading this recent front of singing, emotional trap artists from the city.

Calboy was born Calvin Woods on April 3rd, 1999, in Chicago, Illinois. As a young child, he stayed in the south side of the city but moved to the suburbs during his high school years. He was raised mostly by his mother and watched his father get sent to prison as a kid. In an interview with Adam 22 of No Jumper, Calboy describes his experience growing up in Chicago. “I was in the house with like fifteen other siblings… It was like three families in one house.”

When asked if he was aware of his family’s financial situation at the time, Calboy responded, “Yeah, it was tough. It was times we had to boil water, you know what I’m sayin’? Use candles, ‘cause the lights were off. Stuff like that. Or pile up in one bed. So yeah, it was clear.”

When he was fifteen years old, his perspective on life would change forever as he watched one of his close friends get shot and killed. It was the first time he had seen someone be murdered in front of him. In an interview with VladTV, Calboy recalls the incident saying, “When I seen that for the first time, like damn. I went to sleep that night, saw it in my dreams. Woke up, seen it. You feel me? Daydreaming about it. So it was kind of stuck with me.” The traumatic event led to Calboy checking into a psych ward temporarily. He was taken to the facility through his school.

During this time, he was supporting himself by selling weed, which he attributes as one of the stressors that forced him to be admitted to the psych ward. He also began self-medicating with Xanax to cope with the trauma. In an interview with Billboard in early 2019, Calboy reflects on his previous struggles with addiction and vowed to prioritize his mental health moving forward.

“I’ve noticed that all of those drugs are downers. I would take them to make me feel better, but they weren’t really doing that. They were bringing me lower … I was constantly going to the doctor and getting stomach pumps, messing myself up all the way. I had to get myself up out of that.”

Motivated by his grandmother, Calboy turned to the Bible and the Quran for guidance. In terms of musical influences, Calboy says he listened to Kanye West, Common, Chief Keef, G Herbo, and Crucial Conflict as a kid. He credits these Chicago legends for providing inspiration for him to get out of the city. He also listens to alternative music and pop, which his older brother and childhood neighbor showed him. Calboy says one of his favorite artists of all time is Michael Jackson.

By the time he got to high school, Calboy had decided to make music. He joined a rap group called “K.O.S.” (“Killers on Sight”), which would later be called “Paper Gang.” His first rap name was Kid Cal. He would later alter the name to “Calboy,” inspired by the character “Cowboy” from the 1979 film, “The Warriors.” Calboy says he started recording music by downloading an illegal torrent of Pro Tools and FL Studio off The Pirate Bay.

He built his own home studio by salvaging an old computer from his house and asking his uncle to buy him a microphone. He learned how to record, engineer, and produce music entirely on Youtube. He says he never used to write down his lyrics, which he still does to this day. Reminiscing about his old music, Calboy says the content in his first few songs was generic and random.

It took him several years for him to truly find his sound. His first project dropped in December of 2017, called “Anxiety.” The mixtape featured 12 tracks and performed reasonably well, gaining hundreds of thousands of streams on Soundcloud. In June of 2018, he followed up his success with ten new tracks on another mixtape called “Calboy the Wild Boy.”

The project performed even better than his first project, with two songs, “No Head” and “Run,” reaching over a million plays on Soundcloud. After two years of releasing music on Soundcloud and Youtube through Paper Gang, Calboy caught the attention of Polo Grounds Music founder and CEO, Bryan Leach, as well as A&R executive Sergio “Gwop” Patillo. He signed a deal with Polo Grounds Music in October of 2018, joining artists like A$AP Rocky and Pitbull on the roster.

In August of 2018, Calboy dropped his biggest single to date, “Envy Me,” which would go platinum in under a year. Since its release, it has gone four times platinum. The music video for the track has over 200 million views on Youtube and over 350 million streams on Spotify. It peaked at number 41 on the Billboard Hot 100 chart. In the song, Calboy delves into issues in his past like poverty, drug abuse, and gun violence.

Overall, like much of Calboy’s music, the song is heavily inspired by pain. Bellowing out his sorrows on a moody piano loop, Calboy artfully details the experiences that have got him to his current point in life. The rapper says the lyrics for the song were inspired by the film “Get Out.” According to him, the situation he describes in “Envy Me” is like being in the sunken place. “Envy Me” exploded on video-making apps like Triller and TikTok, with literally millions of people making videos singing and dancing along.

The song would also gain steam after a video surfaced online of Kodak Black vibing to it. The two would build a relationship from that point on, and Calboy would later join Kodak on his “Dying to Live” tour in early 2019. “Envy Me” was released through Polo Grounds Music and RCA. It was produced by JTK, and Calvin Woods has songwriting credits on the song. The song would later be included as the opening track for Calboy’s next mixtape.

In March of 2019, Calboy would receive another huge cosign, becoming the first artist to sign to Meek Mills imprint record label, “Dreamchasers.” According to Calboy, his relationship with him began when Meek Mill mentioned his name in an interview. Meek Mill also posted a few videos of him singing along to Calboy’s music. Eventually, the two linked up and negotiated a record deal. To this day, Meek Mill acts as sort of a mentor to the young rapper.

Since his breakout single, Calboy has also received cosigns from G Herbo, Lil Baby, Moneybagg Yo, Rae Strummurd, and Chance the Rapper. He would go on to appear as a feature on Chance the Rapper’s album, “The Big Day” on track sixteen, “Get A Bag.” He also featured on Delaware rapper’s EP, “Vex Part 2” on track two, “Want Love.” In May,

Calboy would make another splash in the rap game with the release of “Wildboy,” his first full-length effort as a signed artist. The project is ten tracks long and has several notable features on it, including Polo G, Lil Durk, Moneybagg Yo, Yo Gotti, Meek Mill, and Young Thug. Five of the songs have hit over ten million streams on Spotify, with “Envy Me” being the top song.

“Wildboy” is consistent with the typical subject matter of Calboy’s music, like love and romance, with songs like “Adam & Eve” and “Love Me” really showcasing his emotional side. In August of 2020, he was featured on XXL’s annual Freshmen List for the best upcoming rappers of the year, alongside peers like Jack Harlow, Lil Keed, Polo G, NLE Choppa, and others.

In February of 2020, Calboy released a 6-track EP called “Long Live the King” with two features from Lil TJay and one from G Herbo and Lil Baby. The title of the project, as well as the cover art, is dedicated to six of his friends, who all died in 2019. Five months later, in July, he dropped the deluxe version of the project, adding six more songs with features like King Von, Polo G, Fivio Foreign, and Yo Gotti.

In October of that year, Calboy released his first song through “Wildboyz Music Group,” titled “Percosex.” The music video for the song is currently sitting at 1.3 million views on Youtube. Wildboyz Music Group is a record label that was recently created by Calboy. The label’s roster features several artists like 147 Dave-O, 147 Bubz, 147 Boss Woo, ItsMeach147, and of course, Calboy.

Wildboyz Music Group also has signed two in-house producers, JBands and CZBeatz. CZBeatz has produced for Calboy in the past, including the single “Barbarian,” featuring Lil TJay. The label has also signed R&B singer SheLoveLaw, creative director Ron Flair, and in-house manager Moe Bey. Calboy also appeared as a feature in 2020 on songs like “Thug Kry” by YG and the remix to “Diana” by the late Pop Smoke.

Notably, there was a brief controversy surrounding “Diana” when Calboy’s verse was removed for Pop Smoke’s posthumous album, “Shoot For The Stars, Aim For The Moon.” Oddly enough, Calboy’s ad-libs were still kept on the song. There was a brief back and forth on social media between Calboy and Pop Smoke’s team, but it seems that cooler heads have prevailed as Calboy was able to contribute to the music video.

Pop Smoke has previously mentioned Calboy in his hit song, “Christopher Walken,” saying, “I’m the one they envy like Calboy.” Before Pop Smoke’s tragic death, Calboy says he and Pop Smoke had discussed filming the video with King Combs.

So far in 2021, Calboy has been very busy. To start off the new year, Calboy released a remix to Florida artist SpotemGottem’s viral song, “Beatbox.” The song was paired with a music video, where Calboy is seemingly quarantined in his home. The same week, Calboy also appeared on a music video on WorldStarHipHop with ForeverHood and Foogiano for a single called “Make It Happen.”

Just a few weeks later, Calboy was recognized by Billboard and Remy Martin as the number one hottest, emerging R&B and hip-hop artist out of Chicago. There was also an Atlanta and Los Angeles list, topped by Mulatto and Giveon. Calboy also has a variety of aspirations outside of music. According to the 19-year-old, he’s working on a book, trying to get into the movies, and has plans on starting up a production company. He also plans on opening a soul-food restaurant in the near future.

Calboy’s mother was a chef. In an interview with HipHopDX, he says he plans on serving traditional southern foods like fried chicken, yams, mac and cheese, collard greens, and cornbread. The restaurant will be called “London’s Kitchen,” dedicated to the granddaughter of his mother, London.

Calboy Touches On His Connection To Kodak Black & Meek Mill, Meaning Of “Wildboy” & More In “The Come Up” | HotNewHipHop

Get To Know ‘Envy Me’ Rapper Calboy: Watch | Billboard

Chartbreaker: Calboy on His Chicago Rap Roots and Avoiding “The Sunken Place” | Billboard