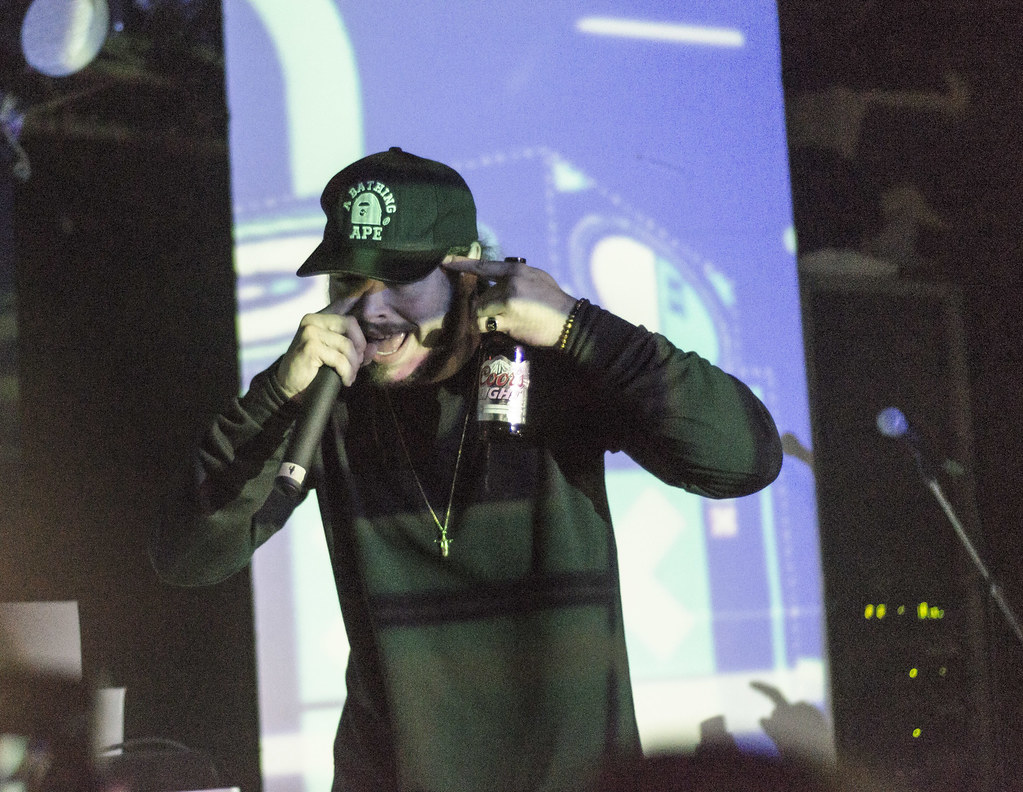 Home » Too Short » How Did Post Malone Get His Name?

In any kind of showbusiness, be it film, TV, or music, an aspiring artist has to have a good show name that’s both memorable and indicative of their wider personality. In lots of cases, artists will come up with particularly crazy or apparently nonsensical names to draw attention or make them unforgettable.

Post Malone is arguably one of the most unique names in the hip-hop scene, but it’s also noteworthy because it incorporates part of the artist’s real name into the stage name. Where did he come up with it? There are actually two contrasting stories.

When He Came Up With It

Post Malone’s name has been the focus of two different origin tales over the short few years since he became famous. The one place where both stories agree is when he decided to come up with the stage moniker. According to Post, he first came up with a name when he was 15 or 16, although he can’t remember exactly what age he was.

This adds up with a timeline of his entire origin story, too. Around this time, Post was auditioning for bands like “Crown the Empire” and really getting into music as a hobby and art form. No doubt that, like many dreaming teenagers during this period in their lives, Post was imagining success and endeavored to come up with a stage name he could stick with over the long-term. After all, it’s hard to get rid of stage names after they’ve been attached to you for a while – better to make them good the first time!

So he decided to keep part of his real name – his identity – and mix it with something memorable.

The first possible origin for the name is actually a rumor rather than a story that Post told himself. It revolves around the basketball player Karl Malone. Malone was, according to this version of the story, one of Post’s icons when he was growing up, likely before he seriously started getting in the music. Post Malone’s full name is Austin Richard Post, so it’s easy to see where the full stage name came from.

He would have simply combined his last name, put it in front of the “Malone” from the basketball player, and the rest would seem to be history.

On the other hand, Post has told a conflicting story about where he sourced his stage name, which is now recognized by millions of people across the world. In this variation, he got the name “Post Malone” from a random name generator that he found on the Internet. He likely added his last name beforehand in this version too, in order to make it uniquely his. But Malone, according to this story, came from an algorithm.

Interestingly, this name generation story is similar to the one told by Childish Gambino. As RapTV explains, Childish Gambino got his rap name from a Wu-Tang Clan online name generator. Maybe Post heard the story and thought it was a fine way to come up with a name, so he did the same thing? Who can say?

The mild controversy is only around because, of course, the name couldn’t have come from two sources; one of them has to be the truth. The name generator story is the most recent version. For our money, we’d bet that it was the second story that’s true, as this is the story that Post himself has explained on NBC.

It’s more likely that the initial name was one of the earliest rumors back when Post was first starting to skyrocket in terms of popularity. Fans like to speculate as to the names and quirks of their stars, so someone probably came up with the first story and spread it around the Internet until, like many classic rumors, the story became closer to the truth than fiction.

Fortunately, Post explained his own version on live TV, so we’d bet his version is the real deal.

Post Malone’s name-creation story isn’t all that unique, even though it seems a little whimsical for something that would stick with the creator for the rest of his professional life. Still, can you blame a 15 or 16-year-old for being a bit loose with the responsibility? Besides, hip-hop names are usually either casual or tongue-in-cheek.

Let’s take a look at some other successful rappers’ stage names for example. Dr. Dre was reportedly inspired by Julius “Dr. J” Erving, a basketball player who Andre Young (Dr. Dre, as he would later be known) admired. Interestingly, this story is pretty similar to the original rumors surrounding Post’s moniker. Maybe someone on the Internet liked the two stories and decided to combine them?

Jay-Z was known as “Jazzy” when he was younger. Carter also adopted the name Jay-Z as an out of respect to Jaz-O, a Brooklyn MC who ended up giving Jay-Z the chance he needed that success. Even better, both subway lines “J” and “Z” run through the hometown where Carter grew up: Brooklyn.

Or you can take Frank Ocean, who took the inspiration for his name from Frank Sinatra. Where does the ocean come from? Sinatra started in the 1960s film “Ocean’s Eleven”, so all Frank did was combine the two aspects and, bam! He had a memorable and lasting name. He even legally changed it in 2010!

Let’s take another example: Eminem. Despite lots of popular myths surrounding the phonetic similarity to the popular candy brand, Marshall Mather didn’t choose the name because of his sweet tooth. Instead, he took the name from his initials: M and M! This was a smart choice overall, as it prevented the M&M candy company from suing him once he became famous.

As you can see, Post Malone is far from alone in how he created his stage name. In fact, it’s easy to say that his name is very normal when you consider the industry that he’s a part of!