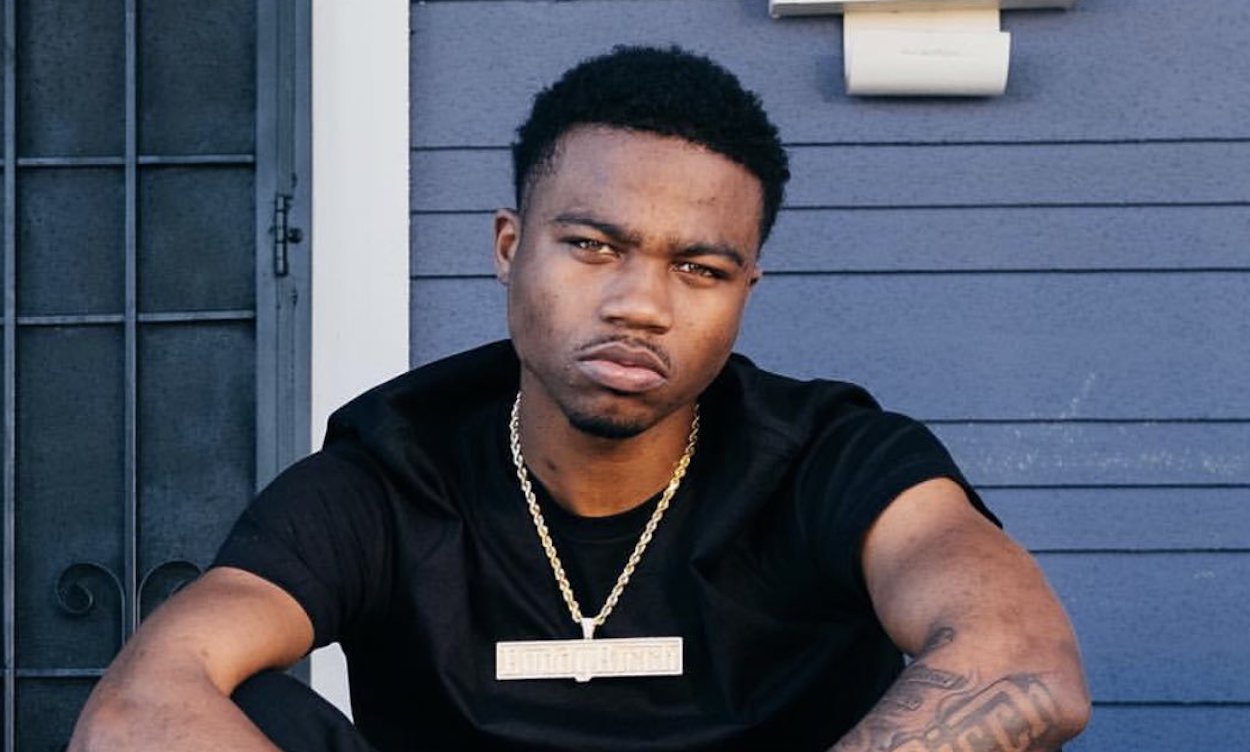 The emerald-eyed rapper, Roddy Rich, is quiet and seemingly reserved, qualities you typically don’t associate with his powerhouse performances, lyrical mastery and ability to command and bring a palpable energy to all of his shows. Roddy uses a gospel-like approach to his music that is marked by lyrics detailing personal and heartbreaking experiences that he pulls from his vast repertoire.

He also pulls from his spiritual roots from his youth but also twists it with a suspicious edge, making his raps more elevated and bringing something new to the hip-hop game.

Rodrick Wayne Moore, Jr. was born on October 22, 1998, and raised in Compton, California but also spent some time living in Atlanta, Georgia as a child, even though Compton was his hometown. He also went to Carson Senior High School and Westchester Enriched Sciences Magnets high school while growing up.

By age 16, Ricch had been rapping and singing since he was 8 years old but decided to mainly focus on rapping and began to take it more seriously as a career. Ricch would also listen to Lil Wayne, Young Thug, and Future while growing up and credits them with inspiring him to start rapping.

While living in Compton, Ricch was a member of the Park Village Compton Crips to which he has two “C”s tattoos in recognition of his affiliation with the gang.

By November 2017, Rich released his first mixtape, Feed Tha Streets, which featured the singles “Chase Tha Bag”, “Hoodricch”, and “Fucc It Up”. These releases earned him instant praise and recognition from veteran rappers like Meek Mill, Nipsey Hussle, DJ Mustard, and 03 Greedo.

Later in March 2018, Ricch released the EP “Be 4 Tha Fame”, which caught the attention of Nipsey Hussle and in May of that year, Nipsey Hussle featured Ricch as his guest performer at a PowerHouse concert in Los Angeles. This shoutout from Nipsey helped Ricch’s career and opened a lot of doors for future collaborations with other famous rappers.

Ricch then released the London on da Track-produced single, “Die Young” in March 2018, which was released as a tribute to a childhood friend who was tragically killed during a high Coincidently, the track was written the same night that late trap rising superstar XXXTentacion died, which definitely gives the track layers of new meaning. “Die Young” was an immediate smash due to this and would go on to have 120 million streams on Spotify and the accompanying YouTube music video would also garner over 80 million views.

Ricch released the “Ricch Forever” single in August 2018 and later collaborated that month with famed DJ Marshmello, who released a sneak peek of the track, “Project Dreams”. Before Rich and Marshmello’s new track dropped, Ricch was also working on another collaboration with Nipsey Hussle titled “Racks in the Middle”. Ricch was also featured and credited as a producer on “Racks in the Middle” which would later land on the Billboard Top 100 at number 40 and would eventually be nominated for and then win in the Best Rap Performance at the 2019 Grammy’s. Due to Ricch’s credits on “Racks in the Middle”, this track would earn him his first Grammy award.

By October 2018, Ricch and Meek Mill decided to link up and Ricch was then featured as a guest performance at a Philadelphia PowerHouse concert. During the concert, Mill would gift Ricch with the famed dreamchasers chain, which would later end up appearing on Ricch’s cover art for his fourth album, Championship (2018).

Feed Tha Streets II, Ricch’s follow up mixtape was released in November 2018 and featured the promotional smash hit single “Die Young” and “Every Season”. The mixtape cracked the Billboard Top 200 by premiering at the number 67 spot. The mixtape also showed up at number 37 on the R&B/Hip-Hop Top Albums chart as well

Ricch and DJ Mustard would link up in June 2019 on the track “Ballin” from Mustard’s third studio album, Perfect Ten. “Ballin”  would later go on to be Mustard’s highest charted track and would eventually peak on the Billboard Hot 100 chart at the number 12 spot. The track would later be recognized at the 2020 Grammy’s when it was nominated in the Best Rap/Sung Performance category but would ultimately lose out to “Higher” from Dj Khalid, John Legend, and featuring the late Nipsey Hussle.

Please Excuse Me for Being Antisocial also produced Ricch’s highest-charting single, “The Box”, which would eventually break into the top the Hot 100 and continue to do so for eleven weeks. The other single, “Start wit Me” featuring Gunna, also peaked at number 56.

Ricch was a guest feature on a number of tracks by other artists in early 2020, including Meek Mill’s track tribute for the late Nipsey Hussle, “Letter to Nipsey”,”Cooler Than A Bitch” from Gunna’s second album Wunna, and “Walk Em Down” by NLE Choppa.

By April of that year, Ricch was featured on the DaBaby led “Rockstar”, which would shoot to the number two spot on the Billboard Hot 100, marking this as Ricch’s second time scoring a number one single on the chart. “Rockstar” also saw international success when it reached number one in the UK as well as in other countries. This success would lead to Ricch becoming the first artist to have two number-one singles on the Billboard 100 within the same year, an achievement that has only ever been held by Ed Shreen when he did the same in 2017.

Ricch was also a feature on late Pop Smoke’s single “The Woo”, which was produced from Smoke’s posthumous debut album, Shoot for the Stars, Aim for the Moon. “The Woo” would end up reaching number nine on the UK charts and number 11 on the Billboard Hot 100.

At the 2020 BET Awards, Ricch would also win in the Album of the Year category for the album Please Excuse Me for Being Antisocial.

Ricch has been recognized for his trademark raspy voice that has been praised for working well with voice filters and his musical style blends rapping and singing.

Others have noted Ricch’s remarkable musical style as a rapper as he combines his hip hop roots with the sound of trap music and drill rap. Concerning transcending themes of his music, Ricch draws inspiration from his life, saying that as he experiences his life, his music will evolve. At the same time, he still tells stories from his own personal experiences because there are unlimited stories and unlimited people from that pool and that he always wants to best represent them. He also says that as his life changes, he hopes to do different things and still wants to be able to tap in and relate to them.

Ricch has cited Kendrick Lamar, also a Compton Native, as a musical influence as well.

Roddy Rich has been nominated and won many awards throughout his career. Thes awards include winning Album of The Year at the 2020 BET Awards for Please Excuse Me For Being Antisocial as well as Best New Artist. He also won in the Best Rap Performance category for “Racks in the Middle” at the 2020 Grammy Awards.

Currently, he is being nominated for PUSH Best New Artist and Best Hip-Hop for “The Box” at the MTV Video Music Awards.

Roddy Ricch’s first released mixtape, Feed Tha Streets was released November 22nd, 2017 by Bird Vision Entertainment. It was available for digital download only and can currently be streamed digitally on Soundcloud.

Roddy Rich’s sophomore mixtape was released on November 2nd, 2018 by Atlantic Records and Bird Entertainment. It includes the singles “Die Young” and “Every Season”.

The single “Die Young” was released as the lead single from the mixtape on July 20, 2018. The track peaked at number 99 on the US Billboard Hot 100.

The track “Every Season” was released as the second single from the mixtape on October 28, 2018. The track did not enter the US Billboard Hot 100 but peaked at number 7 on the Bubbling Under Hot 100 chart.

Please Excuse Me for Being Antisocial (2019)

The album debuted at number one on the US Billboard 200 and would then spend four straight weeks in the top ten. Please Excuse Me for Being Antisocial features the promotional tracks “Tip Toe ” featuring A Boogie wit da Hoodie, “Start wit Me” featuring Gunna, “Big Stepper”, and “High Fashion”.

The album’s audio engineer Chris Dennis remembers first meeting Roddy Ricch at a studio session one a day in March 2019, where after they continued to work together from that day on. When Dennis was reflecting on the entire year leading up to the album’s release, he stated the album went through numerous tracklists changes and that new music was always and consistently being recorded.

When it came to the album, Ricch wanted it known that he didn’t want to rely on a lot of production effects on his vocals, which was and still is a popular trend in rap music. He made clear that he wanted his tracks to be clean, dry, and straight up in your face.

The result of this structure can easily be seen in the track “The Box”, which was allegedly only recorded in 15 minutes. Other elements of Ricch’s experimental sound production for the album include a choir arrangement on the track “War Baby” which was recorded with the help of Ricch’s cousin.

The album topped off the US Billboard 200  in its first week and was Roddy Ricch’s first number one on the chart.

In its second week, the album fell to number three but remained at number three on the chart earning 73,000 more units that week.

The album later returned to number one on the chart for a fourth time in its 10th week on the chart and became the longest-running number-one debut rap album in the US since 2003.

On April 10, 2020, the album was certified platinum by the Recording Industry Association of America (RIAA) for combined sales and album-equivalent units of over one million units in the United States.

Five tracks off the album also managed to chart on the Billboard Hot 100, with the track “The Box” being the highest-charting song, spending eleven weeks at number one on the chart despite no initial single release.