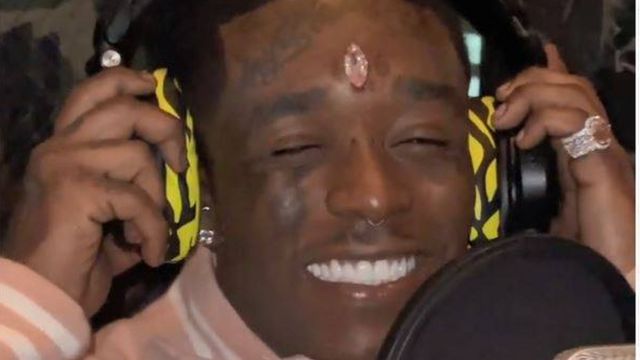 Following his release of Eternal Atake, the biggest first week rap album of 2020, Lil Uzi Vert is back in the spotlight after sharing his idea on Twitter to implant a flawless, pink diamond in his forehead.

The diamond is reported to have cost upwards of $24 million, and weighs in at a hefty 11 carats in total. “I’ve been paying for it since 2017….A lot of M’s in my face,” says Uzi. The Philadelphia based rapper goes on to dismiss any comments about his financial decisions swiftly. “It’s over back to being super rich that’s why I never told y’all … yall swear y’all my parents.”

Lil Uzi Vert can be seen with the GIA certified natural diamond embedded in his forehead on an IG story from one of the go-to jewelers in the industry, Eliantte & Co. Eliantte recently produced Travis Scott’s most recent piece designed by Takashi Murakami.

A similar procedure was done last year by Houston rapper Sauce Walka. His diamond differs slightly from Uzi’s, as his diamond only cost $250,000 and is in the shape of a teardrop. Walka is most known for his track “Ghetto Gospel”, which was recognized by Jay-Z as one of his personal favorite songs of 2018.

Accusations like this create an even bigger cause for concern to enhance his security. Flaunting expensive jewelry is one thing, but being that it is in such a vulnerable spot makes it that much more of a liability. It is imperative moving forward that Uzi increases security and takes extra precautions to avoid any worst case scenarios. Lil Uzi Vert made it clear that he is fully aware of the responsibility that comes with having such a valuable accessory. He claims that he got it implanted because he would rather be made fun of for having a diamond on his head, than losing one on his hand.

Aside from security concerns, Uzi ran into more scrutiny when he took to twitter to post a photo of his implanted diamond. In the photo, blood can be seen dripping from his forehead in a now deleted tweet. “If I don’t get it took out the right way I could die… no seriously.”

Uzi doesn’t appear to be phased by this newly acquired risk, and laughed off the threat from former professional boxer, Anthony Ogogo, who said he will “punch the diamond straight out of his face.”

Swae Lee was also asked about the situation regarding Lil Uzi’s new implant. “I don’t think it’s a bit too much… I think it’s like some third eye open type stuff.” When asked about his thoughts on Sauce Walka’s comments, he replied. “To each his own, you know, everybody can ice whatever, do whatever they wanna do, you know what I’m sayin…”

Lil Uzi Vert continues to stand out from the ever crowding new generation of artists and a strong base of mega stars like Drake and Travis Scott.