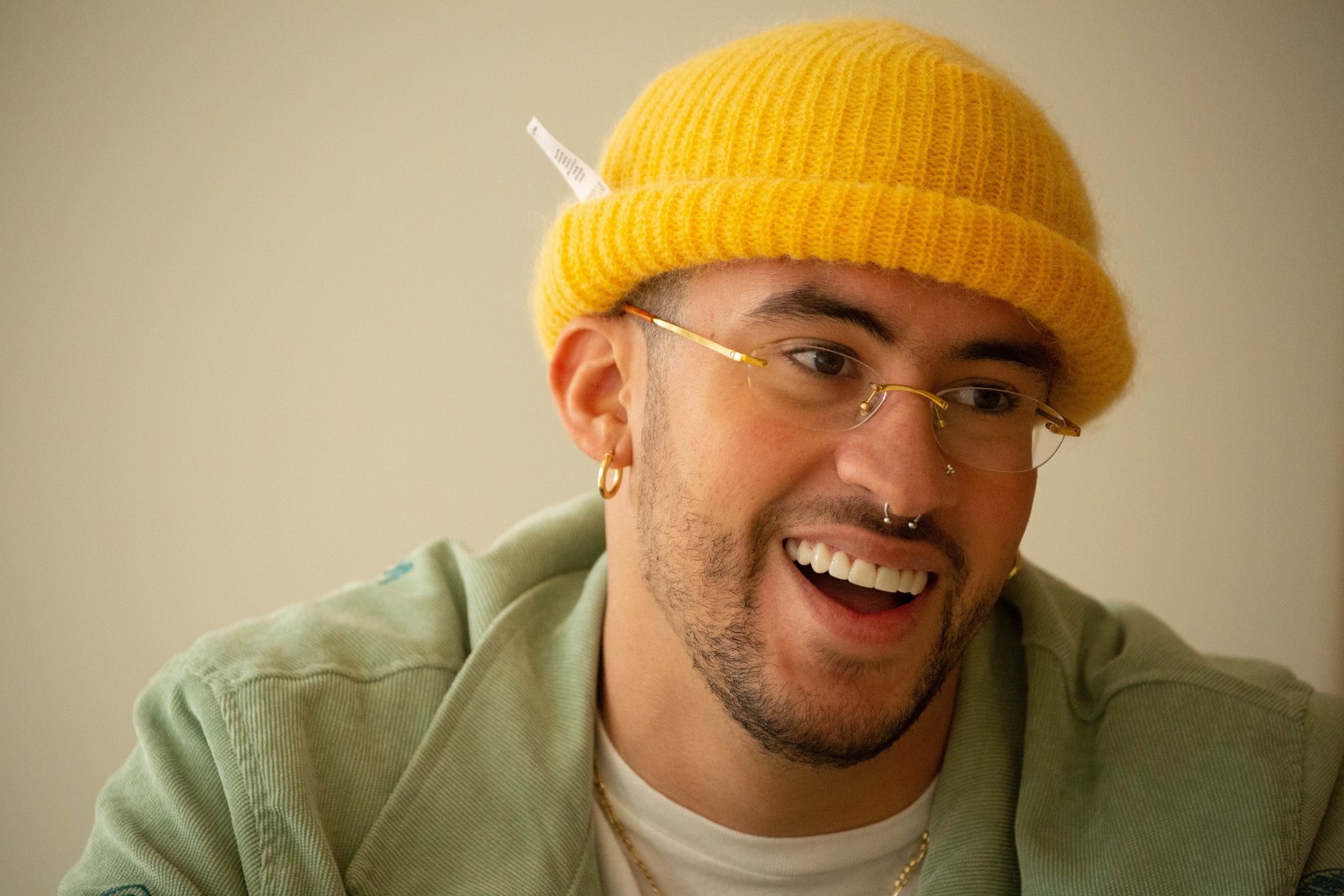 Bad Bunny is an up and coming singer, rapper, and producer who hails from San Juan, Puerto Rican. Bad Bunny’s rise to fame has seen him collaborate with some of the industry’s most well-known voices as well as those who have yet to meet the public eye. He is known to use his musical platform in support of changing gender and racial dialogs and continues to release a string of platinum hits across the board on US and Latino Billboard charts.

Bad Bunny, Benito Antonio Martínez Ocasio, was born in Vega Baja, Puerto Rico, on March 10th, 1994. A serious passion for music, he began singing at the young age of five. He listened to a lot of salsa with his dad and found his love of pop ballads from his mom. It wasn’t until he found hip-hop that all the pieces started to fall into place for the young musician.

His early musical influences are:

Building the Beginning of His Career One Track at a Time

He attended Arecibo Universitystudied audiovisual communication while working as a bag boy in a local grocery store. He would come home at night and make his own music, posting it to the streaming site SoundCloud. It was on SoundCloud that he gained the attention of rapper, singer, producer, DJ Luían, who is only four years senior to Bad Bunny.

DJ Luían grew a loyal fan base while using social media to share his music. He then used his success to form his label Hear This Music in 2015 and in 2016, signed Bad Bunny to the label at the young age of twenty-two.

Through DJ Luían, Bad Bunny was introduced to producers the Mambo Kingz: brother producer duo Xavier and Edgar Semper, who produce mainly Reggaeton, Trap, Merengue Mambo, and Urban Latin music. Together the three producers built Hear This Music and have had a hand in some of the biggest hits in Latin music in the past five years.

The Mambo Kingz were not only impressed by Bunny’s unique musical sound, but the duo claims that it was his style that sealed the deal.

While under Hear This Music, Bad Bunny released hit single after hit single. After the release of his late 2016 breakthrough single “Soy Peor,” he rose to stardom collaborating with Cardi B and J Balvin in 2017 on Cardi B’s single “I Like It,” which hit the US Billboard’s Number One.

In October 2018, Bad Bunny worked in collaboration with Canadian rapper Drake for his single “Mia,” which charted at number three—marking it as Bad Bunny’s first-ever hit US Billboard Hot 100 song.

Bad Bunny left DJ Luían, the Mambo Kingz, and Hear This Music in 2018, striking off to join Rimas Entertainment and surprise-released his first album, X 100pre, as a brief tease of the album release on Twitter it was dropped on December 24th, 2018.

X 100pre stands for Pro Siempre, which means Forever in Spanish. This album includes hits, besides Mia, Estamos Bien’ which debuted in the 10 ten on the Hot Latin Songs chart, and Caro.

Furthering His Career Through Collaboration

Bad Bunny’s second solo album YHLQMDLG debuted at number two on the Billboard Hot 100. It broke records and made history as the highest-charting Spanish language album ever to release, beating Shakira’s Fijación Oral: Vol. 1, which reached number four on the charts in 2005.

What does YHLQMDLG mean? It is an abbreviation for Yo hago lo que me da la gana in Spanish, which means I do whatever I want in English.

Now known for his famous collaborations, YHLQMDLG has no shortage of guest stars.

Bad Bunny has a Unique Sound, Look, and Perspective

Bad Bunny is consistent in challenging machismo and the sexist norms in reggaeton through his lyrics and public statements alike. Bad Bunny is a vocal Queer Ally whose musical themes often challenge Latinx music’s masculine norms.

From his music video for Caro, where he has his nails painted in the first scene and the rest of the video, he is played by a woman. To making his drag debut in the shocking video for “Yo Perreo Sola,” which translates in English to I Twerk Alone<https://www.rollingstone.com/music/music-latin/bad-bunny-drag-transformation-yo-perreo-sola-video-974467/>.

Bad Bunny pushes gender boundaries and discusses female empowerment themes and the sexual harassment that women face in Latin America and beyond in “Yo Perreo Sola.” The song is dedicated to those who wish to dance alone, safely, at the club. In a recent interview with Rolling Stone, Bad Bunny states, “I wanted a woman’s voice to sing it — ‘yo perreo sola’ — because it doesn’t mean the same thing when a man sings it. But I do feel like that woman sometimes.”

And although he may not be openly gay, he claimes to be a person who cares. At the end of the video is a black screen with the proclamation “si no quiere bailar contigo, respeta, ella perra sola,” which translates to “if she doesn’t want to dance with you, respect her, she’ll twerk alone.”

Ricardo Rosselló is the former governor of Puerto Rico. He resigned in August 2019 after a series of multigenerational, non-partisan, non-binary lead protests titled #RickyRenuncia took to the streets demanding the governor’s resignation.

Rosselló faced widespread controversy in July 2019 after a group chat was made public between Rosselló and his employees on the Telegram app. The chat contained vulgar misogynistic and homophobic phrasing, a discussion of Internet troll networks’ social media activity, jokes about people who died in Hurricane Maria, and even an explicit death threat made by Rosselló against San Juan Mayor Carmen Yulín Cruz.

Seen waving the Puerto Rican flag at the demonstrations, Bad Bunny played an essential role in the efforts to remove the corrupt leaders and Governor from their offices. He began by calling on other Puerto Rican stars and citizens to join the rally and was met with support from 1.1 million people who bravely took to the streets to protest, including support from Latin Pop icon Ricky Martin.

Bad Bunny went silent on May 19th. He had just released two albums, set off a controversy by cross-dressing in a hit music video, and after all that activity, it was time to disconnect, even from his cell phone.

A few days later, George Floyd was murdered by Minneapolis police, and the entire country began rioting and protesting in the name of Floyd and the Black Lives Matter movement.

However, Bad Bunny remained silent and absent from social media, much to his fans’ disconcertion who had seen him rally for Puerto Rico the year before and had seen his allyship and support for LGTBQ and the rights of women. His fans were confused as to why the Latinx artist had not spoken up in support of the Black Lives Matter Movement.

In June, Bad Bunny breaks his silence via a lyrical email statement released to Time Magazine titled Perdonen. Perdonen translates to Forgive Me. In this email, he details how he has been in continued isolation due to Covid-19, without a phone. Bad Bunny voiced how he wished to make a statement beyond a simple image or empty words on social media. He uses this song’s lyrics to detail his stance on the historical racism that is still prevalent against Latinos and African Americans in the US today.

But I can’t even believe this is still happening.

Maybe it’s because I’ve always seen people’s hearts and, in my house, I was always taught that we are all the same regardless of race, religion, and surname; that we are all brothers/sisters.

I SWEAR I don’t feel well, and I don’t think I can express myself properly,

I swear it hurts! It hurts to know that people are still being killed because of the color of their skin.

LIVING IN A WORLD LIKE THIS, NONE OF US CAN BREATHE!

YOUR HATE AND TYRANNY,

KNOW THAT WE ARE ALL HOME,

THAT THIS IS OUR LAND.

I remember the white boy with the “bad hair,” that’s what they would say,

just like they did to my black neighbors, and they believed it too.

Bad? Bad are those who still think that way,

WITHOUT REALIZING THAT THE SAME BLOOD RUNS THROUGH OUR VEINS.

Who taught you to be this way?

Why don’t you seek change?

MAYBE THE PRESS IS TO BLAME FOR NEVER SHOWING THE TRUTH

AND SHOW BLACK SLAVES WITH SUCH NORMALCY

AND WHO STILL CALL THIS BRUTALITY A “DISCOVERY.”

TO MURDER AND HUMILIATE THOSE OF ANOTHER SKIN COLOR,

THAT PAIN KEEPS DRAGGING ON.

IT JUST MAKES IT WORSE.

IN A WORLD LIKE THAT, WHO WANTS TO GIVE THEIR LOVE?

IF IT WAS UP TO ME, NONE OF THIS WOULD HAVE HAPPENED,

IF IT WAS UP TO ME, NONE OF THIS WOULD HAVE EXISTED.

YOU CAN’T KNOW SOMEONE BY SIMPLY LOOKING AT THEIR FACE,

YOU CAN’T KNOW SOMEONE BY ONLY LOOKING AT THEIR OUTER APPEARANCE.

FORGIVE ME THAT MY ANGER TODAY IS SILENT.

FORGIVE ME FOR FEELING IMPOTENT TODAY.

I SWEAR TO YOU I LOVE YOU AND I WILL ALWAYS STAND BY MY PEOPLE,

BUT WHAT’S IMPORTANT IS THAT YOU GUYS ALWAYS FIGHT FOR WHAT YOU BELIEVE IN.

NEVER WAIT FOR ARTISTS, OR FOR FICTITIOUS HEROES, YOU ARE THE ONES WHO HAVE THE POWER!!! TEACH YOUR SONS AND YOUR DAUGHTERS TO RESPECT AND LOVE REGARDLESS OF SKIN COLOR. EDUCATE THOSE WHO DO NOT SEEM TO KNOW ABOUT THE HISTORY OF SUFFERING AND STRUGGLE THAT BLACK PEOPLE HAVE ENDURED, ABOUT THE INJUSTICES WE CARRIED FOR CENTURIES. MAYBE WE WON’T CHANGE THE WORLD TODAY, BUT TODAY WE CAN WORK ON MAKING A DIFFERENCE FOR TOMORROW.

There is no doubt that this up and coming Latinx artist breaks records and boundaries with his music, but he’s also not letting the industry dictate who he is and what he has to say.

There is much to come from the career of this young Latinx rapper and the stories he shares through his music. In the hopes of a more inclusive future for people of color and the LGBTQ community, it is now more critical than ever for young artists and those in the spotlight to be vocal about their support and allyship.

Bad Bunny sees this as his duty and has unapologetically continued to speak out in the best way he knows how his music.