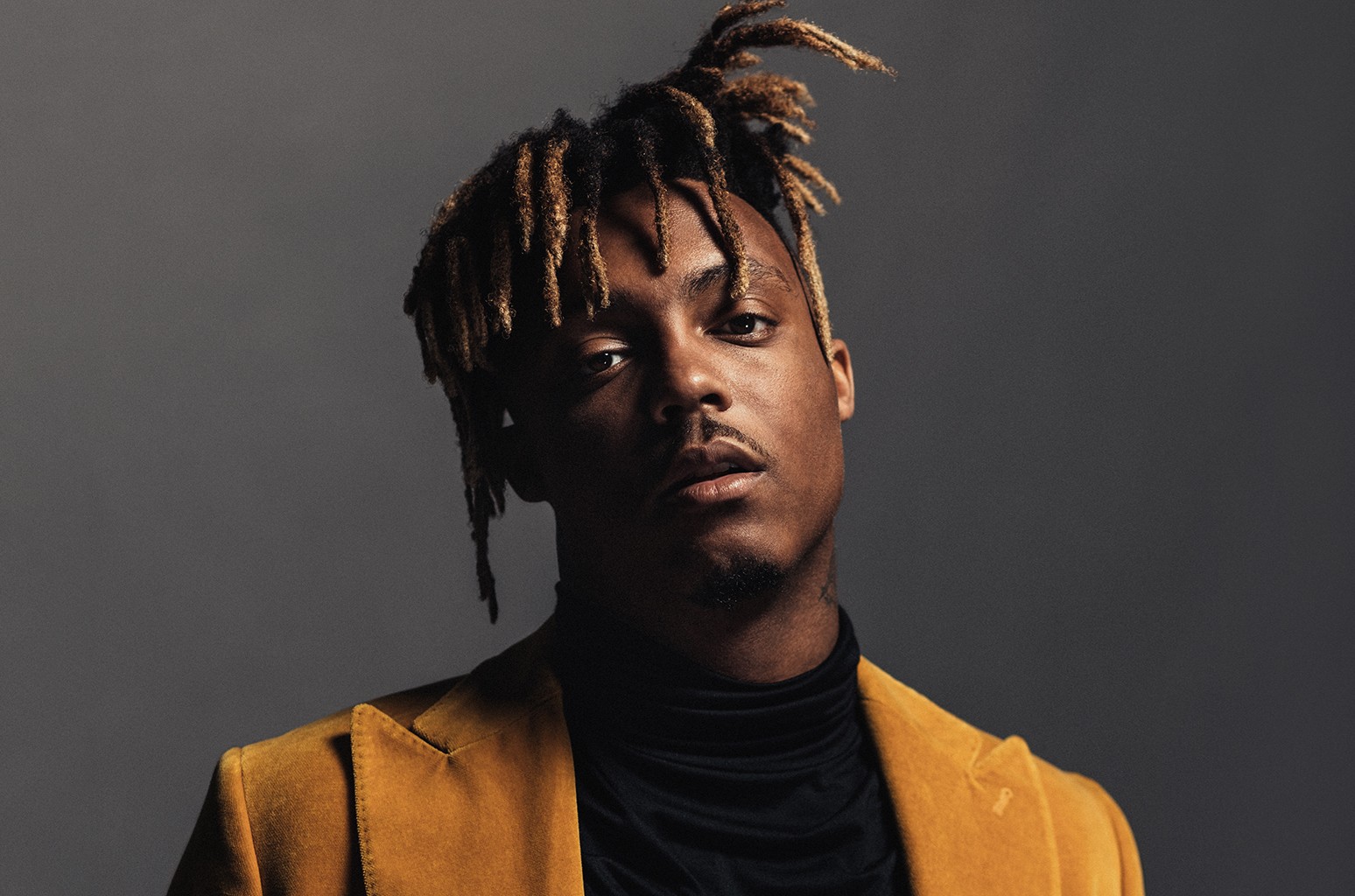 From humble beginnings to a tragic death, this is a recap of a life that was taken too soon. It’s always hard to say what would have become of an artist that died young. How can any of us predict where his creativity was going?

How can we guess what he would have done as he progressed and developed his style over time, with age? There is no way for us to know for sure, what might have been. All we have is the legacy he left behind.

Juice WRLD was born Jarad Anthony Higgins on December 2, 1998. He was born and raised in Chicago Illinois. Originally from Calumet Park, he later moved to Homewood. His parents split up when he was just a toddler, and he and his brother were raised by their mother. His mother was said to be very religious and very conservative.

She didn’t want her sons listening to hip-hop because she thought it was inappropriate. She did, however, let them listen to pop and rock. Apparently, the curse words and age-sensitive subject matter had flown under her radar.

In spite of his mother’s efforts to shelter him, Jarad started using drugs before he reached high school. By the time he attended Homewood-Flossmoor high school, he had already developed and kicked a smoking habit. However, he continued to use drugs for the rest of his life.

Like a lot of modern rappers, Juice WRLD started his career on SoundCloud. He recorded himself with his phone and uploaded it to the site. He began doing this during his freshman year of high school. His first songs were uploaded under the moniker, “JuicetheKidd”, later dropping “theKidd” and going by “Juice” for a while.

He was inspired by local artists, such as Kanye West, and determined to be discovered. After sharing his music on SoundCloud all through high school, he finally garnered the attention of “No Hands” rapper, Waka Flaka Flame.

Juice WRLD released his first mixtape, 9 9 9 on June 15, 2017. The breakout single from this album has been streamed over one billion times on Spotify as of January of 2020. For a 21-year-old artist who recorded the song on his cellphone…that is impressive, to say the least. Mind-blowing, really. The song is called “Lucid Dreams”, and it has been streamed millions of times on Spotify. There was some controversy over this song, though. Some people have speculated that Juice WRLD stole the beat from a song by pop singer, Sting. Yellowcard, a pop-punk band from the early 2000s, also claimed that he used their copyrighted work for this song and went as far as to file a suit.

Lucid Dreams, in spite of what anyone has said, was still a beautiful song, and it was the first to really showcase the talent that Juice WRLD had to offer. Luckily for him and all of us, this was one of those times where we don’t have to watch a new artist fumble around and struggle to find their style at first. Nothing but respect for the struggle, but it’s always amazing and refreshing to see someone, especially right out of high school, have such a strong start.

A year after his first EP, Juice WRLD released his second EP, Nothing’s Different. This mixtape features a song titled, “All Girls Are the Same”, which was the most popular song from this record. This was the song that put him on the map. Interscope Records signed a $3,000,000 contract with him, and he won several awards for the song. He even garnered the attention of another popular young rapper, Lil Yachty. They collaborated on a remix of “All Girls Are the Same”, shortly after Higgins released a music video for the song, which would be his very first music video.

His first three singles were released as singles from this album, to give a little taste to the people who hadn’t heard of him before this album was released with Interscope. If you had been following him since his SoundCloud days, the release of these singles might have felt a little redundant, but it was a blessing to those of us who were just getting our first chance to discover Juice WRLD.

By the summer of 2018, we had lost a few popular young rappers. Some died from medical reasons, some were shot. Either way, Juice WRLD definitely felt the loss. He wanted to show love to those we lost and to let them know that they’d never be forgotten and we would be eternally grateful that they shared their art with us.

He released a two-song album called Too Soon, written with his friends Lil Peep and XXXTentacion in mind. The two young rappers died within just one day of each other. XXXTentacion died first, having been shot during a robbery where someone tried to rob him while he was sitting in his car. Peep died the next day of a drug overdose.

No one could have ever known the sick irony of Juice WRLD making this album. But it set a good precedent. It’s really beautiful and it shows a lot of love and respect for the artistry to pay tribute to the ones we lose, especially when it’s “Too Soon”. Juice WRLD was more than an artist, he was a lover of art. He loved music with everything he had. It’s always special, definitely something to behold, to see someone who is good at making art. Though, it is equally as beautiful and special to see someone who loves it so deeply. Juice WRLD was one of those people.

Juice WRLD set out for his very first tour in 2018. He was joined by up and coming rappers, YBN Cordae and Lil Mosey. By this time, Higgins was still releasing songs on SoundCloud while also working with Interscope. He was really working hard to bring fans from the underground to the mainstream, as well as help lift other artists up.

After having several smaller victories within the last year, things really started popping off for Juice WRLD after his tour. He recorded as a feature on Travis Scott’s “No Bystanders”, which peaked at 31 on the Billboard Hot 100, higher than Juice had reached by himself with one of his singles.

This lead to him performing “Lucid Dreams” on Jimmy Kimmel Live! Two months later, he released another music video, for his single “Armed and Dangerous”. This was immediately followed by a music video for his song, “Fine China”. Both of these songs were from a mixtape Juice WRLD made with rapper, Future, titled WRLD on Drugs.

In early 2019, Juice released his sophomore studio album, Death Race for Love. The singles from this album were

Because of the success he had before this album, and the attention this album immediately received, he was invited to go on tour with none other than the Queen of Rap herself, Nicki Minaj.

Higgins collaborated with NBA Youngboy on a song called “Bandit” that same year. No one knew then, that “Bandit” was the last song he would ever record.

On December 8, 2019 Jarad Anthony Higgins died of a seizure caused by a drug overdose. He collapsed in an airport in Chicago and would be transported to Harvey, Illinois for his funeral on December 13, 2019. He was 21 years old.

Fans were completely distraught by the loss. It was hard to believe that someone so young, who was on such a fast track to being one of the biggest rap artists of our time, could just drop dead out of nowhere. Nicki Minaj spoke of him at the Billboard Women in Music Awards. She said she had a lot of fun touring and working with him, and that he was “a kindred spirit”. She told of a time that they were walking to the stage together and she was nervous, and he held her hand and prayed with her.

Everyone felt the loss of such a talented, sweet young artist. Sometimes we feel disappointed in ourselves for not knowing that someone is hurting. I don’t think any of us could have known that Juice WRLD was still struggling with an addiction. He certainly didn’t seem like it. He seemed to be in much better shape than he was when he was in middle and high school. Music definitely brought some joy to his life and for that, we can all be thankful. It’s just unfortunate that it wasn’t enough.

Drug addiction is a disease that is almost always accompanied by depression. They say that the drugs are a symptom of addiction, and not the other way around, as some people believe. It’s the desire to escape from reality as much and as often as possible because some feelings are too hard to bear. Usually, drug addicts are the people who feel things most deeply. Feeling things deeply can be both a curse and a blessing. What we try to do is find healthy ways to cope with and express our feelings.

Juice WRLD definitely found a healthy, and awe-inspiring way to express his feelings. He just struggled with finding a healthy way to deal with them. How do you feel immense pain and make sense of it? How do you make it go away? Those aren’t easy questions for anyone to answer. This is why we don’t think less of people who turn to drugs or alcohol. Depending on the person, we may hate their behavior sometimes. However, we must understand the pain they’re in and those of us who are capable can find ways to help them before it’s too late and the ones we love are gone “too soon”.

In 2020, there were some posthumous releases of Juice WRLD’s music. The first song released after his death, was a song called “Godzilla” in which he featured for Eminem. This song was very successful in the charts and even peaked at number one on the UK singles chart.

Later that month, with “Godzilla” being the only recording of Higgins to be released before his death, his family announced on Instagram that there would be more releases to come. He has recorded a few features for other artists, and there were also a few recordings from SoundCloud that hadn’t made it out yet.

The message from his family and his crew at Grade A Productions read,

“From the bottom of our hearts, we want to thank each and every one of you for your undivided adoration and love for Juice. You guys meant the entire world to Juice and by listening to his music, watching his videos, and sharing your stories about him, you are keeping his memory alive forever. We plan to honor Juice’s talents, his spirit, and the love he felt for his fans by sharing unreleased music and other projects that he was passionately in the process of developing. There will be a public tribute in Chicago, details will be shared soon. Love Juice’s Family and the team at Grade A.”

For the next several months, Higgin’s songs were sampled and remixed by other artists as a tribute.

They complete press and release for his music was affected by the COVID-19 pandemic, so I think we’re gonna have to wait and see what they’re able to find after this global pandemic passes. For now, we can enjoy everything he gave us, love one another, and certainly send prayers or good vibes to his family. The grief they carry must be crushing and all-consuming. I hope they catch their breath and their balance soon, as they find their way to healing.