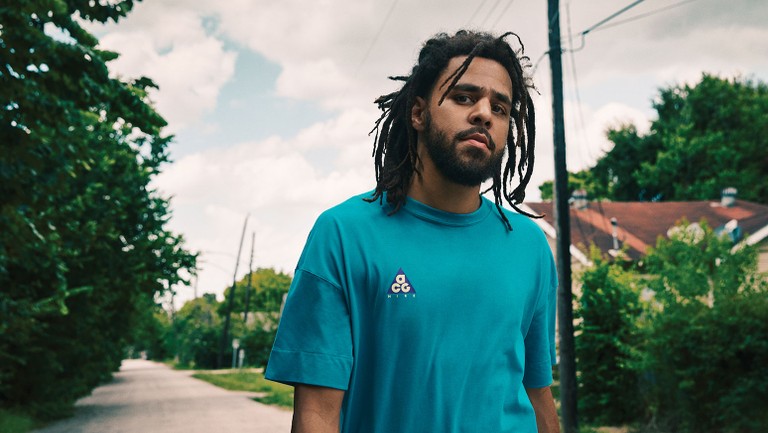 Cole has won Grammys, climbed the Billboard Charts, and sold over 4 million records worldwide. He has quickly become one of the most prolific rappers in the last decade. He has recorded nine albums, and completed over 800 live performances. Here’s a look into the life that got him to superstardom, and the life that followed his big break.

Jermaine Lamarr Cole was born on January 8, 1985 in Frankfurt, Germany on a military base. His father was a black United States Army Veteran, and his mother was a white United States Postal Worker.

His father abandoned his family when Jermaine was 8 months old, so his mother moved with him and his older brother, Zach, to Fayetteville, North Carolina. When J. Cole was a kid, he found interest and passion for basketball and music. He even served as first chair violinist in the Terry Sanford Orchestra.

When he was twelve, his mother bought him a musical sampler for Christmas, and that’s when he started rapping and considering music as a career. As he dove deeper into the inner workings of being a professional musician, he put extra focus on the aspect of production. He would then start producing music under the pseudonym, “Therapist”.

From there, he joined a local hip-hop group called Bomm Sheltuh as a rapper and producer. He performed with Bomm Sheltuh until he graduated high school, when he decided that he had a better chance of making it in the industry if he got out of Fayetteville.

He accepted an academic scholarship to St. John’s University and moved to New York City.

Although, it would be years later that he officially received his degree, because the school withheld it from him, due to a library book he never turned in. It was during his time in college, that he was the president of a Pan-African coalition called “Haraya”. J. Cole also met his wife, Melissa, while attending St. John’s.

There isn’t much to report on their marriage, as they have both made it a point to be extremely private about their life together, but J. Cole has opened up from time to time in his lyrics about how much he loves her and their two children.

After college, J. Cole continued to study the music industry and pursue his place in it. For the next three years, he would post songs on the internet, using the moniker “Therapist”,  and produce his own mixtapes.

He even took a copy of his mixtape to Roc the Mic Studio, headquarters of Jay-Z’s record label, Roc Nation. He waited for three hours for a chance to meet Jay-Z, and was immediately denied a second thought or glance. On May 4, 2007 He released his first mixtape. The Come Up was a 21 track mixtape, 12 of those tracks would be self-produced by J. Cole, and four of them produced by Kanye West.

The debut single, “Simba” was released and shortly after, he had finally caught Jay-Z’s attention, and he was signed to Roc Nation two years later, after featuring on several songs for rappers like Jay-Z and Wale. J. Cole would become the first artist ever signed to Roc Nation.

Jay-Z had a very laid back approach with J. Cole. Whereas most executive producers would have stepped in and told him how to do things, J. Cole was given the freedom to do it his own way.

He would be in complete control of his creative process, and given the space to figure things out on his own. Fortunately, this means that any victories he gained along the way would be entirely because of him. Winning feels better when you win on your own, anyway.

The songs on these mixtapes are still part of most sets that J. Cole performs at his shows, in addition to the new songs on the albums he tours for.

By the end of the year, this album would sell over 800,000 copies and top three of the Billboard Charts at number one before going platinum. The album would be followed by the Cole World world tour, which ended in 2012. After that, he immediately started working on his second album, Born Sinner.

On June 18, 2013 J. Cole released his second studio album, called Born Sinner. It was produced by Roc Nation, Columbia Records, and J. Cole’s own label, Dreamville, which he founded back in 2007 while he was producing his mixtapes and early singles. Born Sinner features artists like Kendrick Lamar, TLC, Miguel, and Amber Coffman.

The album is full of samples from popular songs, and even a sample from a Mike Epps comedy special. The album sold over 796,000 copies and peaked at number 34 by the end of the year on the Billboard Top 200. This album was followed by one of his best-and cheapest tours of his career. The Dollar and a Dream tour cost $1 per ticket. J. Cole wanted to give every fan an opportunity to be a part of the experience, regardless of their financial situation. He goes on to still make money off this tour, despite wrapping the tour up over seven years ago.

During this tour, he visited nine cities, and played songs from both his major records and his mixtapes. Because of the success of this tour, J. Cole would make it somewhat of a tradition to do the Dollar and a Dream tours throughout his career.

This album sold a whopping 3 million copies in its first year and topped the charts at number 8 for the entire year. During this time, Cole was also going back and forth with Kendrick Lamar, as they would seemingly take turns remixing one another’s songs.

By this time, J. Cole has not only founded his own label with his manager, Ibrahim Hamad in 2007, but he also started a non-profit called The Dreamville Foundation in 2011. His goal with

The Dreamville Foundation was to help the under-priviledged meet opportunity. J. Cole has been known, for his entire career, to be both an advocate for those who aren’t living at the height of luxury, and an example of how far you can go despite the situations you’re born into. He also held writing competitions and implemented an annual event in Fayetteville, North Carolina called “Dreamville Weekends”, which is open to the entire community.

This album touches on a wide range of heavy topics, such as mass incarceration, love, fatherhood, and racial injustice. The title track of this album was inspired by a song he heard on SoundCloud by an underground rapper named BLVK, who would go on to help Cole produce the track for the record.

Cole spent most of his time at the studio, in New York as he awaited the arrival of his first child.

The album was written during the 4 Your Eyes Only Tour, and during part of his vacation after the tour. He is said to have been working on another album since then, set to drop during 2020, but has been delayed due to the spread of COVID-19. He revealed that the album was to be named The Fall Off, which sounds like it may be a call back to his mixtapes, The Come Up and The Warm Up. According to RapTv, J. Cole and his team are not confirming the release of a new album any time soon.

His lyrics in “4 Your Eyes Only” are evidence that he is in tune with social and political justice. He stands for the marginalized and disenfranchised communities, and sings their praises through poetic lyricism.

You can, no matter who you are, be whoever you choose to be. There are no rules. After all, what is art with rules? Art is subjective. Art is a personal experience and it feels and translates differently to everyone. Expression isn’t worth anything if it’s not free of structure. J. Cole has built an entire career on his philosophy to do it his way.

Without direction. Because of this decision, we have been graced with some of the most important work hip-hop has ever seen. In the years to come, we will learn so much more from J. Cole.

We have been blessed and inspired since he came around, and the imprint he’s left on the music industry won’t soon fade away.