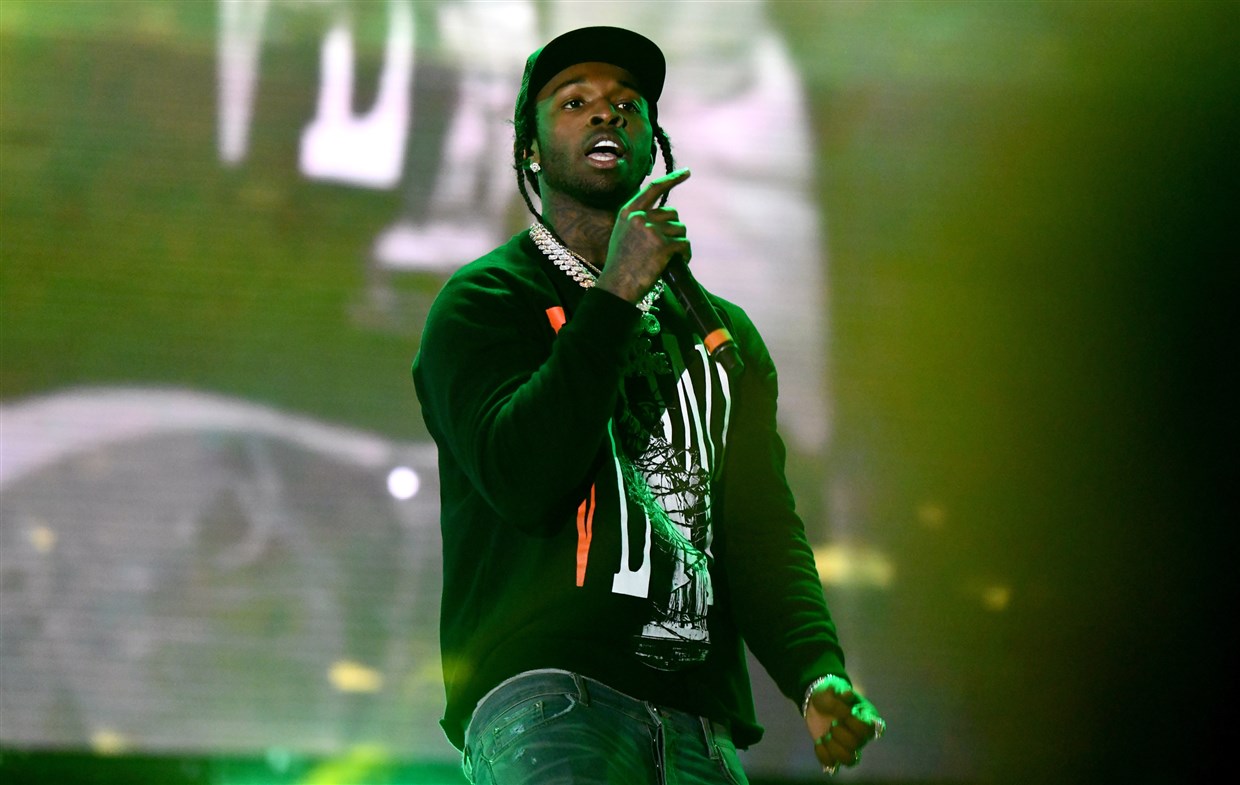 A Young Artist Taken Too Soon

We find ourselves in this place too often as we attempt to understand why a young talent is taken from this world too soon. Pop Smoke’s music was about his community and the culture of his community.

His resounding bassy voice was smoky and snarly, unique, and almost sexy. His career had an old fashioned come-up where his music was shared via word of mouth instead of record label releases. His mixtapes became the anthem of the streets and could be heard blaring from car windows and shared at neighborhood gatherings.

Pop Smoke’s rise from obscurity is a testament to the real American dream of the hard work and hustling in the streets it takes to change your stars. And though his rise to fame was fast and hard, much like the streets of Canarsie, New York where he grew up, his music left a lasting impression as the sound of an entire city.

Pop Smoke was a New York City-based rapper, singer, and songwriter. Born Bashar Barakah Jackson on July 20th, 1999. He released his first mixtape, “Meet the Woo, in 2019, his second mixed tape released on February 7th, 2020, just weeks before he was murdered on February 19th, 2020, while renting a home in Los Angeles. His first studio album, Shoot for the Stars, Aim for the Moon, was released in July 2020 after his death and debuted at number one on the Billboard 200. All nineteen tracks from the album charted on the Billboard Hot 100.

Who was Pop Smoke in his Early Days?

Pop Smoke was born and raised to a Jamaican mother and Panamanian father in Canarsie, Brooklyn. Canarsie, also known as the Flossy, is a suburban city of Brooklyn, New York. Canarsie gets the Flossy nickname because of the materialist street culture there to show off your “flossy” clothes and lifestyle.

But it wasn’t all Bentley’s and Dior, the Flossy, like many New York neighborhoods, was plagued by gang violence, and the need to feel protected and safe was ingrained in him at an early age.

In the eight grade, Pop Smoke was expelled for bringing a gun to school. In interviews, during his early rise to fame, the rapper often describes the fear and worry of harm that lay around every corner in his neighborhood.

In an interview with the New York Times, he says, “Where we come from, it ain’t sweet. I had a gun in school. I had guns in church. People was trying to kill me.”

Bashar’s early dreams weren’t of being a rap star. Before his life in music, Pop Smoke was a gifted athlete. He played baseball, basketball, and football and was given a full scholarship for basketball to Rocktop Academy in Philadelphia, PA. Rocktop was a prep school that focused on preparing young athletes for college scholarships.

Unfortunately, at fifteen, he was diagnosed with a heart murmur and was no longer allowed to participate in organized sports. He returned home to Canarsie after his short basketball career ended.

Like many kids in the Flossy, Pop Smoke turned to the streets and began selling drugs as part of his come up. Just a year after returning from Philly, he had saved enough, $50,000, to buy himself a BMW 5 series.

Music was never Pop Smoke’s intended career path, and in fact, it was a career that happened by accident.

Pop’s stage name was a blend of two nicknames he had growing up. His Panamanian grandmother endearingly called him “Poppa” and ‘Smoke Oh Guap’ was his neighborhood calling card. He combined the two and Pop Smoke and legend was born.

In 2018, hanging out with friend and young New York upstart Jay Gwuapo, Pop Smoke visited a Brooklyn recording studio to hang out. The story goes that Pop Smoke and Gwuapo got high together at the studio, and Gwuapo was so high he fell asleep.

Pop then snuck into the recording booth and attempted to try rapping for the first time, just to see what it was like. Unbeknownst to him at the time, Pop Smoke would create a track that would change his entire life.

Pop Smoke borrowed a beat from an East London producer and songwriter with a quintessential UK Drill sound named 808Melo from YouTube, and his first track, “MPR,” was born and released in early 2019.

The track was leaked to the internet and received a million plays on Spotify and over 37,000 streams on SoundCloud.

Pop Smoke was so inspired by 808Melo’s work he continued to borrow beats and used one in his January 2019 release, Flexin. Flexin received 100,000 views on YouTube in a single day.

YouTube would become his release medium and help him on his path towards fame. Long before his music career, a young Pop Smoke would have his first run-in with viral fame at the age of twelve in a YouTube video titled “Young Crip Gets Slapped by NY Bloods After Taking Out Beads.

In this video, he is slapped by some young NYC Bloods after pulling out some beads he was wearing around his neck. Although Pop does not retaliate and leaves the altercation unharmed, all except for his pride, this event would forever shape his future.

Seven years later, a video surfaced of Pop Smoke taking his revenge on one of the young men who slapped him as a kid.

Pop Smoke’s Manager would reach out to 808Melo in an effort to pay him for the use of the beat. Instead of being angry and retaliating with lawsuits, 808Melo, after digging into Pop Smoke’s YouTube releases, realized this was a golden opportunity for collaboration.

Pop would also befriend Rico Beats, an American record executive, record producer, and songwriter who also hails from Brooklyn and introduced Pop to record executive Steven Victor. The three met for an interview, and by April of 2019, Pop Smoke would sign with Victor Victor, a subsidiary of Universal Music.

Later in April, Pop Smoke would release his breakout single, “Welcome to the Party,” from his debut mixtape, “Meet the Woo,” which came to fruition. Pop flew 808Melo into New York so they could work together. 808Melo would produce every track on the album. The mixtape would garnish over 280 million streams worldwide.

Obsessed with the deep drum sounds of drill music, Pop Smoke’s sound would begin to redefine the music genre with his hometown pride and unique voice.

“Welcome to the Party” from his debut mixtape was remixed two times, featuring Skepta in August 2019 and the other with famous female rapper Nicki Minaj in September.

These remixes would help garner his popularity outside of his native Brooklyn and would gain him a humble spot at number 5 on the Billboard’s Bubbling Under Hot 100 chart. This chart is a 25-spot extension of the Billboard Hot 100 with featured songs featured ranking 101 and 125.

Later in 2019 began collaborating with other popular artists. Some of those artists and tracks being:

In December 2019, Pop flew to the U.K. to further collab with Melo for his sophomore mixtape ‘Welcome to Woo 2.” The two had found their formula, and they had high hopes and big dreams for this next release. Which Pop claimed would be a happier record.

In an interview with Collin Gannon, Pop Smoke is quoted in saying “I make music for that kid in the hood that’s gotta share a bedroom with like four kids – the young kids growing up in poverty. I make music for that kid who got beef, thinking about how, when they go to school, these people might try kill me but I still gotta get my diploma for my mom. I make music for kids like that who know they just gotta keep going, that there’s a better way. That’s who I really make it for. Obviously, it got bigger, and it’s for everybody now – people all across the world fuck with it now – but I really make it for them. The people who really need some inspiration.”

By the start of 2020, Pop Smoke’s career was in full swing and his second mixtape “Meet the Woo 2” was to be released in early February.

His first tour was scheduled to start March 2nd, and multiple dates of the tour were already sold out. Pop Smoke was primed and ready to be one of the most prolific hip-hop artists of 2020.

The Upstart Career of a Young Talent Ended Too Soon

Just two weeks after the February 7th release of “Meet the Woo 2” Pop Smoke was fatally shot by four home invaders at a house he was renting in Los Angeles.

The act was thought to be a targeted robbery, but oddly, the house had not been ransacked. Only a few things were missing, making it a curious burglary case that seemed to have alternative intentions rather than just theft until other evidence was found.

It is theorized that the robbers had found the address of the house Pop Smoke was renting from an Instagram post from Pop’s friend Mike Dee who tagged their location on the popular social media site the previous day. The four robbers broke into the house around 4:30 am just a few moments after Pop had returned home from being out late that evening.

Pop Smoke was shot several times and was taken to Mount Sinai Hospital and was pronounced dead.

In the days after Pop Smoke’s murder, his streaming counts increased by 392% jumping from five-million to 24.7 million.

Pop’s death happened at a strange time in America, just 30 days before the fear of Covid-19 would hit American streets and the rise of the Black Lives Matter movement in response to the death of George Floyd in late May. It’s no doubt that Pop’s sound was for the people as many of Pop’s songs have been reclaimed and repurposed as rally cries at demonstrations and riots. His sound and his songs, though not particularly political, were homegrown in the streets, celebrated being black, and epitomized the call for a normal life with economic opportunities and free from everyday harassment.

On July 3rd of 2020, Pop’s debut studio album, “Shoot for the stars, Aim for the Moon” was released by Steven Victor and executive- producer 50 Cent as a tribute to Pop’s work and life.

Pop had been working on the album, which takes on a more polished and featured packed sound that, in a way, diminishes the Brooklyn drill sound in exchange for more commercial appeal.

However, Pop’s deep, raspy voice is still able to shine through this high dollar 360 to his street legacy to give fans the closure they need from losing a beloved neighborhood artist so soon. The album debuted at number one—all of the tracks from the album finding a place on the Billboard Hot 100.

“Shoot for the Stars, Aim for the Moon” made Pop Smoke the first act in hip-hop history to have a posthumous album debut at number one on the charts.