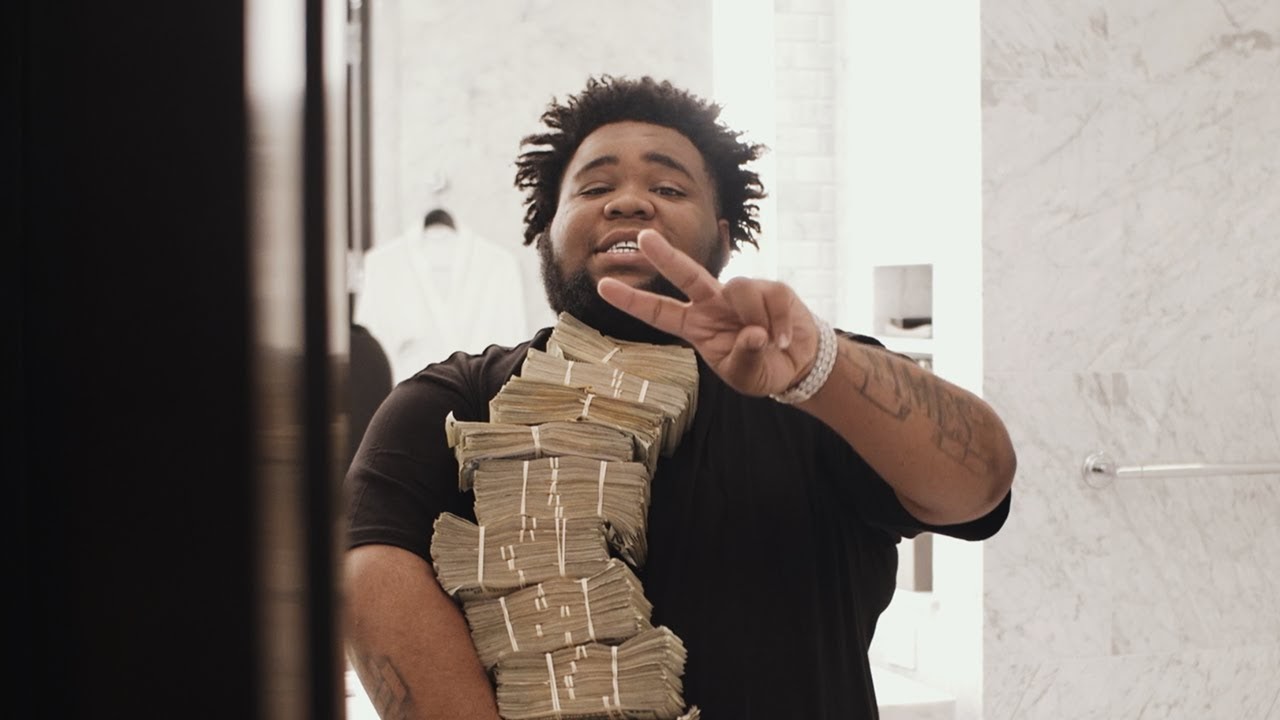 Blending R&B and hip hop together with a sweet and soft singing voice and a powerful, harsh rap, Rod Wave is one of the primary musical storytellers of this new generation. Despite only being in the business a short while, his vulnerable and powerful lyrics reflect the wisdom of a man far beyond his years.

So don’t let his youth and relaxed nature fool you, this young man is going places, and he’s earned it.

Rod Wave, also known as Rodarius Marcell Green, was born on August 27, 1998, in St Petersburg, Florida. After his parents split while he was in elementary school and his father went to jail, Rod Wave’s life changed enormously. His family inched closer to poverty, so he turned to the streets to find income.

For a few years, he involved himself in illegal activity that found him in and out of juvie – drug dealing, robbing, breaking into things, and more. During that period, he was also arrested a few times. Two of the arrests were for carrying a weapon, one on school property.

When Rod Wave’s father got out of jail, he quickly realized he needed to set his son on a different path. Rod had always had an affinity for music and had begun singing early on in elementary school. His dad took that interest and extended it further, buying his son a microphone while Rod’s brother bought him a computer.

Now by making and recording his own music, Rodarius Green had all the tools he needed to become Rod Wave. He began to turn his life around and was able to graduate high school, something that had been in question up till that point.

After experimenting with his new equipment, Rod Wave released a few mixtapes. He first started it as a hobby, but began to take it more seriously as locals started to like and recognize his music. In 2017 he released his mixtapes Rookie Of The Year and Hunger Games. His local success led to bookings. Th in 2018, he released another two mixtapes, Hunger Games 2 and Hunger Games 3, as follow-ups.

After he had gained a significant amount of fame locally, Rod Wave signed to Alamo Records. He kept releasing original content and started collaborations with other musicians, such as “Feel The Same Way” with Moneybagg Yo and “All We Know” with LPB Poody.

June of 2019 saw the release of his latest mixtape, PTSD. Upon its release, one of the songs on PTSD, “Heart On Ice,” immediately went viral on TikTok and other social media platforms. As a result, it hit 25th on the Billboard Hot 100 and propelled Rod Wave up into the public eye. The song even went platinum and received two co-signs from 21 Savage and Meek Mill.

Capitalizing on this new exposure, he released his first studio album Ghetto Gospel only a few months later, and it hit 10th on the Billboard 200 chart. Ghetto Gospel pushed Rod Wave’s status up even further and contained more collaborations such as “Cuban Links” with Kevin Gates, someone who Rod Wave had always looked up to and admired.

His second studio album Pray 4 Love was released in April of 2020, and was received very well, with the album itself hitting 2nd on the Billboard 200 and multiple songs charting on the Billboard Hot 100. The song “Rags2Riches” featuring ATR SonSon particularly excelled, hitting high on multiple Billboard charts, becoming popular on TikTok, and spawning an alternate track featuring Lil Baby.

The album itself was a unique release from Rod, as it didn’t include any collaborations. When asked about it, Rod Wave claimed it was because the album was too personal to him and held a heavy space in his heart.

This feeling of Pray 4 Love being a very personal album to Rod Wave is evident in the vulnerability expressed in the lyrics and in his voice. He sings about his childhood and his family, about jail and sadness. His lyrics speak about how life limits people who grew up like him, and about his want for happiness. All the while, there is a softly spoken pain in his voice, as if recalling these memories hurt him and yet are precious to him nonetheless.

Surprisingly, this heavy-hitting album was put together in about a month. This could be due in part to the fact that Rod Wave felt more comfortable as an accepted musician in the business or that he had just gotten his process down by that point.

On the album, Rod has said that his favorite songs are “Fuck the World” and “Roaming”. The first, a song about how he wants to be alone. The second, about how when you stop and think about life for a moment, how crazy it all seems. Both reflect what he wants his fans to take away from this album – life is real, and it’s intense. It has moments of joy and moments of hardship, so why spend your time trying to pretend you’re something you’re not.

Other than his album, Rod Wave did a bit of touring in 2020 before Covid-19 fully broke out, and the rest of the tour delayed until 2021. He also featured on the album Nobody Safe, a collaboration between YoungBoy Never Broke Again and Rich the Kid, for the song “Sorry Momma.”

His voice soft and sweet, his rap low and gruff, his lyrics reflecting modern issues seen every day – Rod Wave is a master of his craft.

Rod Wave is a unique figure in the entertainment scene as his music is considered to be a modern take on the hybridity between hip hop and R&B. He mixes singing and rapping with ease, both styled to be very melodic. Rod wants to focus on lyrics and usually brings slower tempos to do so, with instruments brought in to help reflect the themes of the song clearly and deliberately.

Another interesting mark of Rod Wave is that he deliberately chooses not to use studios for recording his songs. He sets up the equipment wherever he feels the urge and records there on the spot, just himself and another sound engineer. He chooses to record this way because it fits with how personal he finds the music is to him; he doesn’t want to enter a studio where hundreds of other artists go and record things they haven’t even written or seen before. Rod Wave wants the music and the process to feel distinctly his.

Above all else, Rod Wave is a storyteller. His lyrics focus on stories of everyday life and the complexities within. Using themes of love, pain, depression, and hardships, he connects with his youthful audience and delights them by staying authentic and relatable. Rod Wave has said that he doesn’t want his music to be like other rappers nowadays, specifically citing music that have themes about drugs, fast cars, and being rich. He doesn’t see those themes as real or meaningful, since it could all be gone tomorrow.

He himself has stated that he wants to be relatable. He looks at music as a savior for him, something that grounded him and made him feel as if he had a purpose when he had felt untethered for so long. Now he makes music not only for himself, but also to create that sense of a purpose for other people who feel lost in a world that doesn’t see them.

Rod Wave has named Kanye West as a huge influence that has continued to inspire his work. After Rod’s accident in early 2020, when he almost died, he found Kanye to be a kindred soul who had also been in an accident early in his career. Kanye spoke about it in his debut album, especially in the song “Through the Wire.” So as a homage, Rod Wave wrote about his near-death experience and titled the song “Through the Wire” as well.

Since Rod Wave’s rise to fame, some musicians who influenced him early on have asked to work with him, notably Kevin Gates and E-40. Rod has also claimed to be a fan of 2Pac, who he thinks was another great storyteller in the hip hop world, using his music to send a message.

This theme of admiring storytellers in the music world comes up again in his admiration for Adele, who he says can portray her emotions in her lyrics and through her voice very well, specifically her pain.

Rod Wave has a relatively quiet personal life. He’ll share and speak about his interests and life on social media when it suits him, but tends to not get into scandals or create drama. The only drama he has really spoken about was some tension regarding how his label was handling things, but he quickly spoke out again afterwards to clarify that things had been patched up.

Romantically he has had girlfriends but has never shared their names, nor has the media and press ever released relationship news on the gossip channels. He’s not particularly active on social media when compared to other musicians, only really liking and posting to his YouTube account. Until at least April of 2020, he still didn’t have a TikTok account, the platform that contributed most to his rise to fame.

He got into trouble on the streets and was arrested at a young age, but ever since finding fame with his music, he has not been embroiled in any issues with the law. One of the only major media finds of 2020 on Rod Wave was when he got into a life-threatening accident where he sustained a lot of internal bleeding. Since then, he has shared that the accident has made him look at life with new eyes and be very appreciative of what he has.

After months of delay, Rod Wave’s new album has been promised to release within weeks, but still had no official date tied to it. Rumors of the cause of the delay have stemmed from social media posts where Rod Wave spoke about internal issues with his label. He alluded to money issues and possible creative interest issues, but posted later that everything had been resolved with the label, and the album is still on track to be released… soon.

Rod Wave also plans to tour this year and has dates set up, although some have already been canceled, and others seem doubtful if they’ll happen due to Covid-19. Whether or not this new tour will align with his new album release or is a continuation of the delayed tour dates from the year before is something that has yet to be confirmed.

Beyond that, Rod Wave has recently made a publishing deal with Sony/ATV. As someone who likes telling stories, he has expressed an interest in the movie business and scriptwriting, so we may yet see a movie with Rod Wave’s name in the credits.