Kanye Sets Himself on Fire at Chicago Listening Event 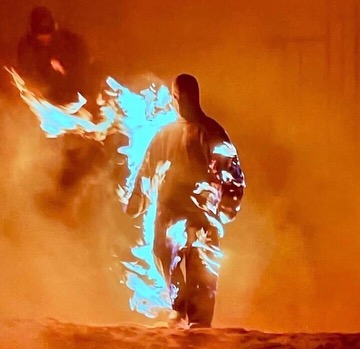 Kanye West is a master of many things, and successfully marketing himself is one of them. Along with his unquestionable artistic talent and musical gift, the outrageous actions of this man are an undeniable factor driving his album sales, ticket sales and net-worth. He has delayed the release of his future album Donda numerous times which had the effect of selling out two concerts in Atlanta, one of which sold over 7 million in on-site merchandise and both of which broke Apple streaming records. RapTV reported on this here.

These concerts have included theatrics, such as him ascending into the air, and performance art including the recreation of his album-production living conditions inside of Mercedes Benz stadium. They have also included advertising for his GAP partnership, selling $7 million overnight worth of the red jacket that he wore to the event, not to mention invaluable advertising for future Donda sales. And finally, the concerts feature the latest edit of Donda which means that Kanye is making money off of the act of producing the album itself. He is brilliantly taking fans along for the ride of completing an album, and they are more than willing to go.

This continued last night Soldier Field in Chicago with Kanye West’s third listening event – the most outrageous to date. Last night (August 26), Kanye recreated his wedding nuptials to Kim Kardashian with the reality TV star playing herself, featured controversial figures DaBaby and Marilyn Manson and set himself on fire! But after it all, there was again no album.

For some, the anticipation, fun and humor of it all is wearing thin as many took to social media to complain about the delay, according to the New York Post. Many are beginning to wonder if it will ever drop at all.