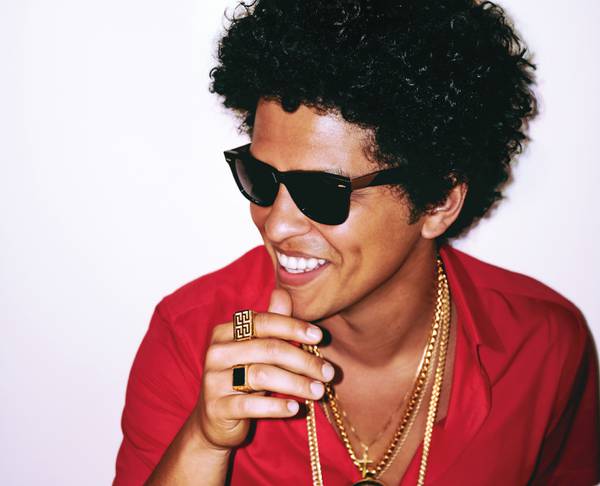 Pop, funk, reggae, hip hop, soul, R&B, and rock. You name the genre and style, and international musical phenomenon Bruno Mars has probably had his hand in it. Blending old school style and influences with new world production values and sensibilities, Bruno Mars holds an appeal that undeniably spans the globe and generations.

Life on Mars – The Early Years

The artist who would come to be known as Bruno Mars was born Peter Gene Hernandez on October 8, 1985 in the Waikiki area of Honolulu, Hawaii, where he was then raised until 2003. Later, when he was just a toddler, Peter Gene was dubbed by his father with the nickname “Bruno” owing to a striking familiarity in appearance to Bruno Sammartino, a professional wrestler.

He came from an auspicious beginning as a performer in a very musically focused family, as his parents were both also professionals in the field and his uncle worked as an Elvis impersonator. His father was a performer of rock and roll music (particularly the  music of Little Richard), and his mother danced and sang.

The two met during a show in which his father was a drummer and his mother danced the hula. His father, Peter Hernandez, was a transplant from Brooklyn, New York of half Ashkenazi Jewish and half Puerto Rican descent. Bernadette San Pedro Bayot, Hernandez’s mother, was of Filipina (with some Spanish) ancestry and had emigrated to Hawaii from the Philippines. After the two got together, Peter Gene was later born as one of six children into this very musical family.

Mars’s Elvis impersonator uncle was a huge influence in his life and was a big part of what led Mars to the stage, where he began singing songs by The Temptations and Michael Jackson and performing multiple times a week with The Love Notes, which was the Hernandez family band. Because of his infamous Elvis Presley impersonation, he became notoriously known as “Little Elvis” in Hawaii and was even put on to perform in the 1990 Aloha Bowl halftime show.

His young career continued to blossom, leading to a small role in the 1992 film Honeymoon in Vegas and appearances on The Arsenio Hall Show. This seemingly idyllic childhood life of performance hit turbulence, however, when Mars’s parents split up during his twelfth year, causing the family band to subsequently split  up, as well.

Mars moved out of his home along with his brother to live with his father in various dangerous situations. He found himself suddenly living on rooftops, in the back of a car, and even at one point in Paradise Park, an abandoned bird zoo where his father had previously been employed.

It was in 2003 that Bruno Mars left Hawaii to move to Los Angeles, California to pursue a musical career. This event came after his sister, who lived in Los Angeles at the time, played Mars’s demo for the head of Artists and Repertoire for Dr. Dre’s Aftermath Entertainment musical record label, Mike Lynn.

At that point, Lynn asked him to come to Los Angeles, which Mars did following his high school graduation. He never forgot his Hawaiian roots and often claims his upbringing as a huge source of inspiration for his musical style, saying, “Growing up in Hawaii made me the man I am. I used to do a lot of shows in Hawaii with my father’s band. Everybody in my family sings, everyone plays instruments… I’ve just been surrounded by it.”1

When he moved to Los Angeles, he adopted his stage name, Bruno Mars, as a combination of his father’s nickname for him from childhood and the addition of “Mars” to the end. When asked about this piece of the puzzle, Mars stated, “I felt like I didn’t have [any] pizzazz, and a lot of girls say I’m out of this world, so I was like I guess I’m from Mars.”2 Additionally, the nickname turned stage name served another purpose, which was to help Mars circumvent music industry stereotypes that might try to label him as a Latin artist.

Mars’s Out of this World Career

It was not long after Mars’s move to California that he signed on with Motown Records. The signing took place in 2004 but ultimately proved to be beneficial to his musical aspirations, as he was dropped within the same year by the label. It was then that he began to learn how to really hone the craft of pop music’s creation through Steve Lindsey, a record producer at Westside Independent. Lindsey taught Mars all about the category of pop music and introduced him to a wide variety of artists and subgenres. During this learning period, Mars was playing in a few bands around Los Angeles doing cover songs.

While it took until 2009 for Mars to finally be signed to Atlantic Records, he stayed very busy in the Los Angeles music scene, continuing to play in venues throughout town and also wracking up producer and writing credits. This was also the year that he co-founded The Smeezingtons, leading to several successful collaborations for himself and for other artists.

It’s Better If You Don’t Understand

On May 11, 2010, Bruno Mars’s debut extended play, It’s Better If You Don’t Understand, was released for digital download. The EP generally garnered positive reviews from critics who appreciated its pop pleasantry, though the release never made it past number 99 on the United States’ Billboard 200 albums chart.

The beginning of Mars’s climb to the top also came in 2010 when he was featured as a vocalist on two hit singles:  B.o.B’s “Nothin’ on You” and Travie McCoy’s “Billionaire.”

Doo-Wops and the Hooligans

The release of Bruno Mars’s debut studio album with his band, The Hooligans, came on October 4, 2010. Doo-Wops and the Hooligans was released by both Elektra and Atlantic Records. It was Doo-Wops which contrained several of Mars’s first international hit singles that topped the charts, such as “Grenade,” The Lazy Song,” and perhaps most notably, “Just the Way You Are,” which earned him the Grammy Award for Best Male Pop Vocal Performance

Overall, the album was very favorably received by most critics and drew many comparisons to the work of Michael Jackson. The album ultimately earned five nominations for the 54th Grammy Awards, including:

Album of the Year

Record of the Year

Song of the Year (“Grenade”)

Bruno Mars’s second album release came in 2012 with Unorthodox Jukebox, and this was to become his first United States Billboard 200 number one album. Notably, this album included smash hits “When I Was Your Man” and “Locked Out of Heaven.” Both of these tracks went on to hit the number one spot on the United States Billboard Hot 100 chart. The album received major promotion along the Moonshine Jungle Tour of 2013 and 2014.

Mars performed as the headliner at the halftime show for Super Bowl XLVIII on February 2, 2014 (alongside special guests the Red Hot Chili Peppers), marking the first performer under the age of 30 to headline the Super Bowl in over ten years. It was also notably the most highly viewed Super Bowl Halftime performance in the show’s history to date, and the musical show actually had more viewers than the game that year.

Additionally in 2014, Mars’s collaboration with Mark Ronson, the track “Uptown Funk“, won at the 2016 Grammy Awards for Record of the Year and Best Pop Duo/Group Performance.

November 18, 2016 brought the release of the third Bruno Mars studio album, 24K Magic. The album was released by Atlantic Records, who were initially hesitant on the overall sound. After debuting at number two on the Billboard 200 chart, 24K Magic eventually took the number one spot on the United States Top R&B and Hip Hop Albums (marking Mars’s first time taking this position).

The album received promotion through the world tour of the same name – The 24K Magic World Tour – in 2017 and 2018, and it was hailed by the Associated Press as the tenth-best album of the 2010s. This album would go on to receive seven Grammy Awards, including, Album of the Year, Record of the Year, and Song of the Year. 3

Mars – In Summary and Looking Forward

In 2018, Bruno Mars did some work on a studio album by Chic, It’s About Time, and on February 15, 2019, Mars released a single together with Cardi B entitled “Please Me.” The song headed up the US Billboard Hot 100 Chart to finally top out at number three.

This was followed up after five months with a collaboration between Mars, Chris Stapleton (an American country style singer and songwriter), and Ed Sheeran (of British pop singer songwriter fame) on the song “Blow”  for Sheeran’s album No. 6 Collaborations Project. A statement was made on March 26, 2020 by a representative of Bruno Mars which indicated that he is currently in the creative process of working on his next album.

With an extensive list of influences, it is easy to find traces of Bruno Mars’s roots all over the musical map. Some notable artists from whom Mars has drawn include: Michael Jackson, Little Richard, Keith Sweat, New Edition, Boyz II Men, Babyface, Usher, Janet Teddy Riley, Led Zeppelin, The Beatles, Stevie Wonder, Freddie Mercury, Elvis Presley, Jack White, Carlos Santana, Amy Winehouse, George Clinton, and Bob Marley. It is often noted that his music seems to span musical genres across styles and eras, which denotes the lifelong impact that a family history in musical artistry had on him.

His style has an undeniable Motown vibe and feel to it, with many of his tracks carrying and underling “feel good” tone and uplifting, optimistic message.

However, Bruno Mars is not to be considered a bubblegum, flighty artist, as many of his songs also address darker and more mature themes (such as loneliness, broken relationships, and the subsequent pain of dealing with loss). He is notoriously organic in his creative process, as lyrics and sounds come to him in an unforced, natural way,

To date, Bruno Mars has sold over 130 million records throughout the world, which makes him one of the all time best selling musical career artists. His career includes many accolades since his beginnings in 2010 with multiple awards and nominations. Forbes added him to its 2013 list of “30 Under 30” and later the Celebrity 100 list in 2014, 2018, and 2019. Time Magazine has included Bruno Mars on the 2011 list of the One Hundred Most Influential People in the World; additionally, Bruno Mars was listed as one of the best songwriters in 2011 by Music Week and by Billboard in 2013. His thus far career awards and nominations list includes nine American Music Awards, three Brit Awards, eleven Grammy Awards, and ten Soul Train Awards.