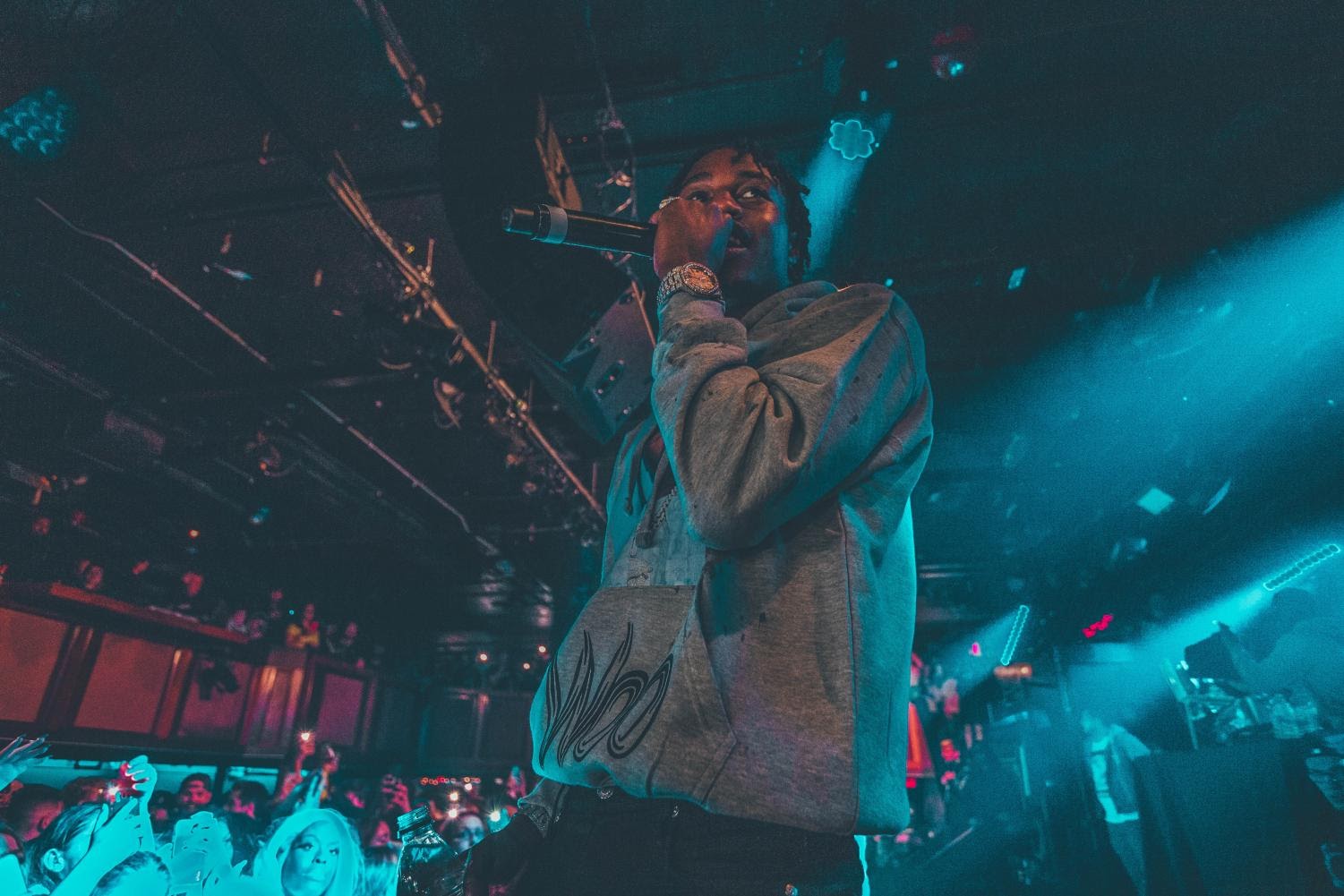 In a span of just a few years, Bronx rapper Lil Tjay has become one of the most promising young talents out of New York. His wavy, melodic style and emotional, heartfelt lyrics have garnered fans from both his neighborhood and worldwide. In the past, Lil Tjay has been compared to fellow New York artist A Boogie With The Hoodie, which the rapper has addressed in a song saying, “They said I’m the new A Boogie, relax. I ain’t never tried to copy his swag.”

In conversation with the highly controversial “King of New York” title, Lil Tjay has dropped numerous hit songs, with two platinum plaques already in his young career. The 19-year old artist is rapidly surpassing many of his peers in New York, blowing up both in the streets and on the radio and Internet. Lil Tjay is best known for his collaborative record with Polo G, “Pop Out,” as well as solo hits like “F.N” and “Leaked.” He has over fourteen monthly listeners just on Spotify, and his audience is growing every day.

Growing Up in New York

Lil Tjay was born Tione Jayden Merritt on April 30th, 2001, in the South Bronx, New York. Growing up, he listened to a variety of different artists, including older acts like Michael Jackson, Prince, and 2Pac, as well as newer artists like G Herbo. “It was different eras of music in my life. I definitely got influences from a lot of different places.”

As a kid, Lil Tjay says that he always knew he was going to be famous. He recalls watching Youtube videos of Justin Bieber and thinking to himself that that could be him one day. His dream job as a child was simply to be an artist. He hadn’t yet considered that he could become a rapper. However, Lil Tjay claims he was always certain of his path to stardom.

In 2016, Lil Tjay was sentenced to a year in a juvenile detention center for a robbery. He was fifteen years old. At the time, he was frequently getting into fights and committing petty thefts. In his XXL Freshmen interview in 2020, Lil Tjay was asked about his freshman year in high school, a customary question for all the class inductees.

He responded, “I was absent. I was incarcerated for the freshman year. Life was just like, different. It wasn’t nothing like now. I was just very misled. A lot of different things was going through my head. And I was introduced to streets at a young age.” Lil Tjay credits his time spent behind bars for sharpening his writing skills as an artist.

He was released after about a year and returned to his Fordham Heights neighborhood in the Bronx. This time though, he promised his mother that he would behave. Initially, he had broken that promise, constantly skipping school to run the streets and engage in criminal activities.

One day though, he found himself in a studio. It was during his first session that he would record his breakout single, “Resume,” which dropped in January of 2018. It was the first song he had ever recorded in a real studio and his first solo song.

The Birth of a Career

In the song “Resume,” Lil Tjay sings softly but confidently about courting a woman that he’s interested in. Despite not speaking Spanish fluently, he throws in a few Spanish phrases into the track. The song was released while Tjay was only sixteen years old. It was paired with a homemade video of Lil Tjay hanging out in a small apartment in the Bronx. The music video has 26 million views since its release.

After gaining some significant buzz, Lil Tjay began uploading more songs to YouTube consistently. He received substantial attention online for songs like “Long Time,” “Goat,” and “Brothers.” His songs took off almost instantly, each gaining millions of streams on Soundcloud. In just the first ten months of Lil Tjay’s rap career, five of his songs had reached at least a million streams on Soundcloud.

Compared to his first hit, “Resume,” the song “Brothers” demonstrates Lil Tjay’s singing ability more, really flexing his vocal range in the hook. It also offers much more insight into Lil Tjay’s life growing up in the Bronx, which he references throughout the song. Additionally, the music video is much more professional. Nearly three years later, Lil Tjay remixed the song, adding a Lil Durk feature to it.

In March of 2018, Lil Tjay competed at a rap competition called the “Coast 2 Coast LIVE NYC All Ages Edition” and won first place. While performing, the crowd reacted very favorably to the 16-year old. His performance also impressed a record label A&R who was in attendance as a judge.

Fans quickly became encapsulated with Lil Tjay’s catchy, feel-good melodies and deeply relatable content. Unlike many of his peers in the New York drill scene, he utilizes harmony in most of his songs and allows himself to be vulnerable on tracks. He touches on issues that people from similar situations can relate to, such as poverty, drugs, and violence. However, he also speaks on subjects that are universal that anybody can resonate with, like love, relationships, and trust issues.

All of this momentum in Lil Tjay’s career was enough to attract Columbia Records, who Lil Tjay signed a deal with in mid-2018. He joined a roster filled with numerous big acts like Polo G, Fivio Foreign, Remy Ma, and others. In October of that same year, Lil Tjay followed up his platinum plaque with yet another platinum hit, “Leaked.” The song has over 55 million streams on Soundcloud.

Even without a music video to go along with it, “Leaked” has become one of Lil Tjay’s most successful songs. In the song, Lil Tjay sings smoothly on a spacey, electronic beat. His lyrics carry heavy romantic themes that mesh well with his passionate singing. Despite the lovey-dovey feel of the song, though, Lil Tjay makes sure to remind fans of his street background. In the first verse, he raps, “I can’t let a n*gga shoot me, I’m in a two seat. And before I speak about it, rather grab a loose leaf. Thirty clip of the dip, and I’m in a hoopty. And we spin the opp block with a mini Uzi.”

In December of 2018, Lil Tjay released his first project as a signed artist, a five-track EP by the name of “No Comparisons.” The song “Ready for War,” featuring YNW Melly, performed the best, amassing over fourteen million streams on Soundcloud alone. By the conclusion of the summer of 2018, Lil Tjay had built up a decent-sized following for himself. Lil Tjay says that Drake and Meek Mill are some of his main influences as a rapper.

Moving Up in the Ranks

In Early 2019, Lil Tjay hit number fifteen on the Billboard “Hot 200” chart with his song “Pop Out” with Polo G. It was the first time he had peaked that high on the charts. Lil Tjay really started to climb the hip-hop ranks in the August of 2019 with his EP, “F.N.” It was his first project to hit the Billboard “Top 200” chart, peaking at the number 38 spot. The project contains six tracks, with the most notable songs being “Laneswitch” and “Ruthless” with Jay Critch.

Two months later, in October, Lil Tjay dropped his debut studio album, “True 2 Myself,” featuring artists like Lil Durk, Lil Wayne, Lil Baby, Jay Critch, and more. The album contains seventeen songs. It is certified gold by the RIAA and peaked at the number five spot on the Billboard “Top 200” chart. The project showed some versatility from the young rapper, with tracks like “F.N” displaying Lil Tjay’s storytelling abilities as a lyricist and tracks like “Mixed Emotions” riding on more of an R&B vibe than rap.

Lil Tjay also appeared on Seattle rapper Lil Mosey’s “Northsbest” nationwide tour throughout 2019. In addition, he performed at the three-day music festival, Rolling Loud in Miami Gardens, Florida, in May 2019. He also performed at the Los Angeles festival in December. He has performed at the same Rolling Loud shows as the Migos, Travis Scott, and Kid Cudi. On New Year’s Eve 2019, Lil Tjay ended the year with another hit single, “20/20.”

The cover of the mixtape displays a portrait of Lil Tjay walking on an empty street in New York wearing a mask on his face. There are crows ominously lurking overhead. The scene paints a grave picture of the current circumstances caused by the COVID-19 pandemic. On the project, Lil Tjay touches on the topic sparingly. In one line on the opening track, “Ice Cold,” he says, “JT my aroma, city got Corona. Sad to say I know like just two niggas with diplomas.”

Besides that one project in 2020, Lil Tjay also appeared on a song with Queens rapper Lil Tecca, “All Star,” a song with Chicago rapper Calboy called “Barbarian,” a song with L.A. rapper YG called “Hate On Me,” and a song with Australian rapper The Kid Laroi called “Fade Away,” as well as other features.

In December of 2020, Lil Tjay was filming a music video with Fivio Foreign in his hometown and was surprised by the NYPD, who shut down the video shoot. Authorities pulled up to the scene and searched multiple illegally parked vehicles, including the car that Lil Tjay was in. Neither artists were arrested, but 21-year-old Tahjay Dobson was arrested for gun possession, resisting arrest, and false personation. The police allege that they discovered a loaded pistol in his car.

Lil Tjay took to Instagram Live to record the entire incident and criticize the NYPD. The police claim that they had come to the video shoot to respond to a call saying people were waving guns outside of a Queens housing project. Given that there was only one gun found at the scene and it was found in a parked vehicle, this incident has been interpreted by many as an intentional targeting by the NYPD.

The NYPD has previously been exposed for purposely targeting rappers and surveilling them, coining them the term “The Hip-Hop Police.” They have previously shut down shows of certain New York artists like Don Q, Casanova, 22Gz, and others.

The Future for Lil Tjay

Since “State of Emergency,” Lil Tjay has delivered several stand-alone hits, including his single, “None of Your Love,” produced by Cash Money AP. The song received over 18 million streams in its first eight months out. The beat of the song samples Justin Bieber’s hit record from 2010, “Baby.” Lil Tjay has previously said that he wants to sample Justin Bieber’s “One Less Lonely Girl.” He has yet to do so, though.

On Valentine’s Day 2021, Lil Tjay and 6LACK teamed up to drop their collaborative single, “Calling My Phone.” The single has been the number song on the “Official Trending Chart” in the United Kingdom for several weeks. The song also hit the number spot on Billboard’s “First Look” survey, which measures the popularity of tracks following the first 48 hours of the chart week. It could bring an end to Olivia Rodrigo’s long streak on the U.K. singles chart with her song, “Driver’s License.”

Everything You Need To Know About Lil Tjay | Complex

Why Are the NYPD ‘Hip-Hop Police’ Spying on Rappers? | Complex